You can Download Chapter 15 Polymers Questions and Answers, Notes, 2nd PUC Chemistry Question Bank with Answers Karnataka State Board Solutions help you to revise complete Syllabus and score more marks in your examinations.

Question 1.
Explain the terms polymer and monomer.
Answer:
Polymers are high molecular mass of macromolecules composed of repeating structural units derived from monomers. Polymers have a high molecular mass (103-107u). In a polymer, various monomer units are joined by strong covalent bonds. Polymers can be natural as well as synthetic. Polythene, rubber and nylon 6,6 are examples of polymers.

Monomers are simple, reactive molecules that combine with each other in large numbers through covalent bonds to give rise to polymers. For example ethene, propene, styrene, vinyl chloride.

Question 2.
What are natural and synthetic polymers? Give two examples of each type.
Answer:
Natural polymers are polymers that are found in nature. They are formed by plants and animals. Examples include protein, cellulose, starch etc.

Question 3.
Distinguish between the terms homopolymer and copolymer and give an example of each.
Answer:

Question 5.
Define the term polymerisation.
Answer:
Polymerisation is the process of forming high molecular mass (103-107u) macromolecules, which consist of repeating structural units derived from monomers. In a polymer, various monomer units are joined by strong covalent bonds.

Question 6.
Is ( NH-CHR-CO )8, a homopolymer or copolymer?
Answer:
(NH CHR-CO)8 is a homopolymer because it is obtained from a single monomer unit, NH2-CHR-COOH.

Question 9.
Explain the term copolymerisation and give two examples.
Answer:
Formation of polymers from two or more different monomeric units is called copolymerization. Multiple units of each monomer are present in a copolymer. The process of forming polymer BunaS from 1, 3-butadiene and styrene is an example of copolymerization.

Nylon 6,6 is also a copolymer formed by hexamethylene diamine and adipic acid.

Question 10.
Write the free radical mechanism for the polymerisation of ethene.
Answer:
Polymerization of ethene to polythene consists of heating or exposing to a light mixture of ethene with a small amount of benzoyl peroxide as the initiator. The reaction involved in this process is given below:

Question 11.
Define thermoplastics and thermosetting polymers with two examples of each.
Answer:
Thermoplastics polymers are linear (slightly branched) long chain polymers, which can be repeatedly softened and hardened on heating. Hence, they can be modified again and again. Examples include polyethene, polystyrene.

Thermosetting polymers are cross-linked or heavily branded polymers which get hardened during moulding process. These plastics cannot be softened again on heating. Examples of thermosetting plastics include bakelite, urea-formaldelyde resins.

Question 14.
How does the presence of double bonds in rubber molecules influence their structure and reactivity?
Answer:
Natural rubber is a linear cis-polyisoprene in which the double bonds are present C2 and C3 of the isoprene units.

Because of this cis — configuration, inter molecular interactions between the various standard of isoprene are quite weak. As a result, various strands in natural rubber are arranged randomly. Hence it shows elasticity.

Question 15.
Discuss the main purpose of vulcanisation of rubber.
Answer:
Natural rubber though useful has some problems associated with its use. These limitations are discussed below;

Question 17.
Write the names and structures of the monomers of the following polymers:
(i) Buna-S
(ii) Buna-N
(iii) Dacron
(iv) Neoprene
Answer: 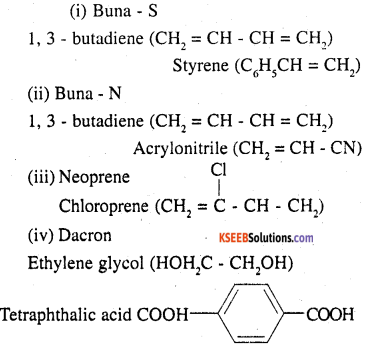 Question 18.
Identify the monomer in the following polymeric structures. 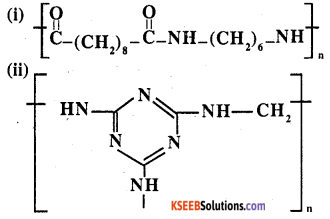 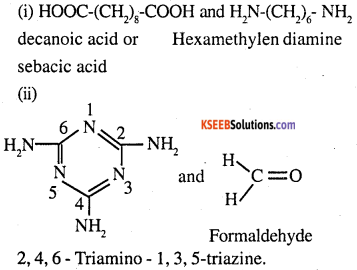 Question 1.
How are polymers classified on the basis of solution?
Answer:

Question 3.
What are the monomeric units of Nylon 6 and Nylon 6, 6?
Answer:
Monomeric repeating unit of Nylon 6 :

which is derived from caprolactam monomeric repeating unit of Nylon 6,6 :

which is derived from 2 monomers, hexamethylenediamine and adipic acid and has the following structure.

Question 4.
What are the disadvantages of natural rubber which are compromised by vulcanisation ?
Answer:

Question 5.
What does PMMA stand for?
Answer:
Poly(methyl methacrylate)

Question 6.
How are polymers classified on the basis of molecular forces?
Answer:

Question 8.
What thermoplastic and thermosetting polymers ?
Answer:
Thermoplastics are linear polymers which can be repeatedly softened on heating and hardened on cooling and hence can.be repeatedly used.
ex: polythene, polypropene etc.

Thermosetting polymers are on the other hand permanently setting polymers. On heating, they harden and cant be softened again.
ex: bakelite, urea-formaldehyde resin.

Question 9.
What is functionality of a polymer?
Answer:
It is the number of bonding sites in a molecule.
Functionality of styrene is one, whereas it is for adipic acid.