You can Download Chapter 14 Biomolecules Questions and Answers, Notes, 2nd PUC Chemistry Question Bank with Answers Karnataka State Board Solutions help you to revise complete Syllabus and score more marks in your examinations.

Question 1.
What are monosaccharides?
Answer:
Monosaccharides are carbohydrates which cannot be hydrolysed to smaller molecules. Their general formula is (CH2O)n where n = 3 → 7. These are of two types. Those which contain an aldehyde (-CHO) group are called aldose and those which contain a keto (C = 0) group are called ketose. They are further classified as triose, tetrose, pentose etc. according to the no. of carbon atoms present (3, 4, 5 respectively). 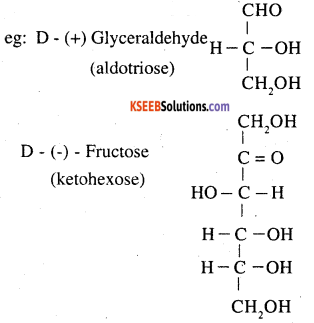 Question 6.
What is glycogen? How is it different from starch?
Answer:
Glycogen like starch is a condensation polymer of α – D glucose. Just as glucose is stored in plants in the form of starch it is stored in the form glycogen in human beings. It is present in liver, muscles and brain. When body needs glucose, enzymes breakdown glycogen to provide glucose. It is also present in yeast and fungi.

Question 8.
What is the basic structural difference between starch and cellulose?
Answer:
Starch is not a single component. It consists of amylose and amylopectin. In contrast, cellulose is a single compound. Amylose is a linear polymer of α – D glucose while cellulose is a linear polymer of β -D glucose. In amylose, C1 – C4 α- glycosidic linkage is present, whereas in cellulose C1 – C4 β- glycosidic linkage is present. Amylopectin has a highly branched structure. 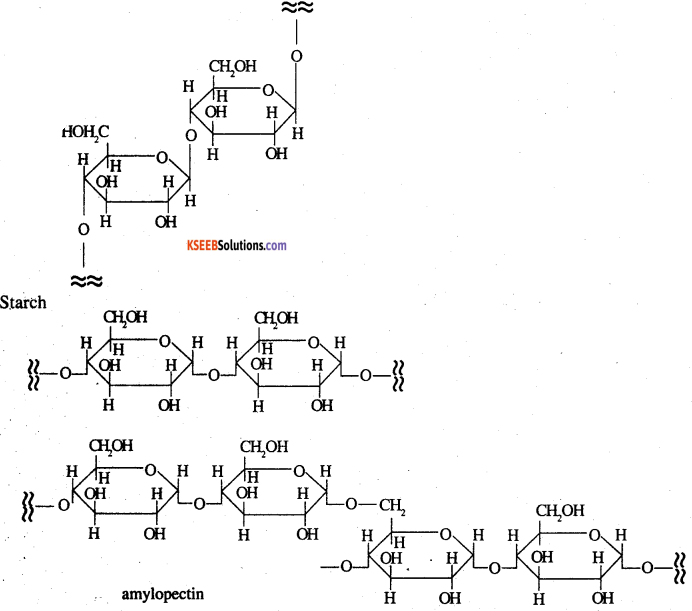 Question 9.
What happens when D-glucose is treated with the following reagents?
(i) HI
(ii) Bromine water
(iii) HNO3
Answer: 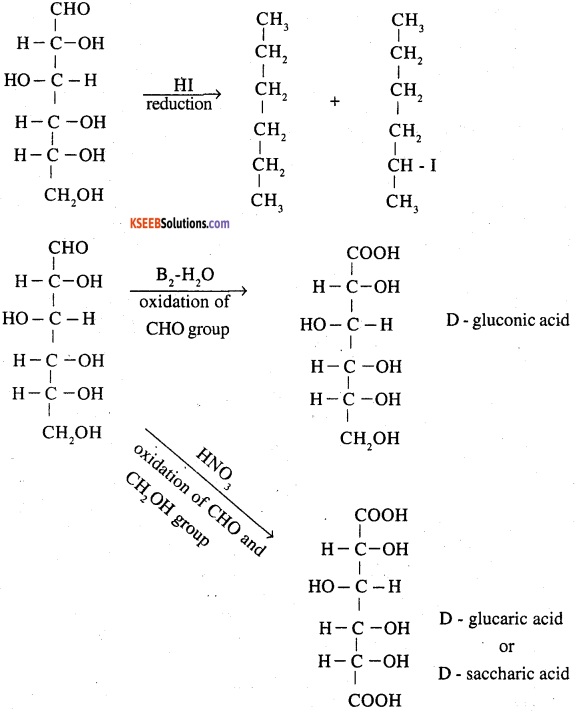 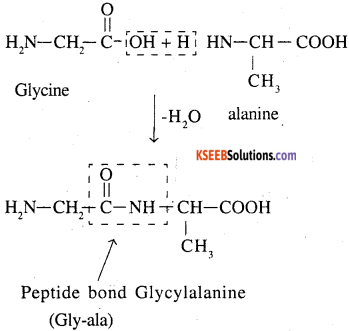 3. Denaturation: Each protein in the biological system has a unique 3-D structure and has specific biological activity. This is called the native form of the protein. When a protein in its native form is subjected to physical changes like change in temperature, pH etc. hydrogen bonds are broken. Due to the cleavage of hydrogen bonds, unfolding of the protein molecule takes place and it looses its biological activity.

α -helix structure:- In this structure, the -NH group of an amino acid residue forms H-bonds with the > c = o group of the adjacent turn of the right handed screw. (α – helix) 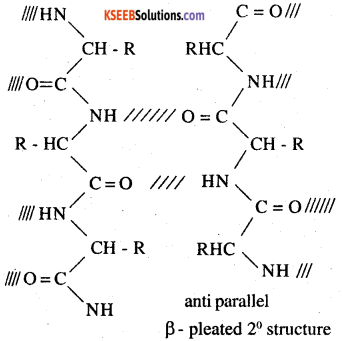 Question 14.
What type of bonding helps in stabilising the a -helix structure of proteins?
Answer:
The H – bonds formed between the NH group of each amino acid residue and the

group of the adjacent turns of the α – helix help in stabilising the helix.

Question 16.
How do you explain the amphoteric- behaviour of amino acids?
Answer:
In aqueous solution, the carboxyl group of an amino acid can loose a proton and the amino group can accept a proton to give a dipolar ion known as zwitter ion

Therefore, in zwitter ion form, the amino acid can both as an acid and a base.

Again, the enzymes used to catalyse the oxidation of one substrate with the simultaneous reduction of another substrate are named as oxidoreductase enzymes. The name of the enzyme ends with 4- ase’.

Question 19.
How are vitamins classified? Name the vitamin responsible for the coagulation of blood.
Answer:
On the basis of their solubility in water or fat, vitamins are classified into two groups:
1. Fat – soluble vitamins:
Vitamins that are soluble in fat and oils, but not in water, belong to their group.
For example: Vitamins A, D, E and K.

2. Water – soluble vitamins:
Vitamins that are soluble in water belong to their group.
For example: B group vitamins (B1, B2, B6, B12, etc) and vitamin C.
However, biotin or vitamin H is neither soluble in water nor in fat.
Vitamin K is responsible for the coagulation of blood.

2. Nucleic acids- (both DNA and RNA) are responsible for protein synthesis in the cell. Even though the proteins are actually synthesised by the. various RNA molecules in a cell, the message for the synthesis of a particular protein is present in DNA.

Question 22.
What is the difference between a nucleoside and a nucleotide?
Answer:
A nucleoside is formed by the attachment of the base to l’ position of sugar.
Nucleoside = Sugar +Base

On the other hand, all the three basic components of nucleic acids (i.e. pentose sugar, phosphoric acid, and base) are present in a nucleotide.
Nucleotide = sugar + Base + Phosphoric acid

The functional difference between DNA and RNA are as follows:

Question 25.
What are the different types of RNA found in the cell?
Answer:

Question 1.
What are the expected products of hydrolysis of lactose ?
Answer:
Lactose is a diasacharide on hydrolysis, it gives two molecules of monosaccarides, i.e. one moiecule of each of D – (+) galactose.

Question 2.
Fresh tomatoes are a litter source of vitamin C than those which have been stored for some -time. Explain.
Answer:
On prolonged exposure to air, vitamin C present in tomatoes is destroyed due to aerial oxidation.

Question 3.
Name the vitamin responsible for poor coagulation of blood due to deficiency.
Answer:
Vitamin K.

Question 5.
Two samples of DNA, A and B have melting temperature (Tm) 340 and 350k respectively. Can you draw any conclusion from these data regarding their base content?
Answer:
We know that CG base pair has 3 H-bonds and AT base pair has two H-bonds, therefore CG base pair is more stable than AT base pair. Since B has higher melting point than A, B has higher CG content compared to A.

Question 6.
Which polysaccharide is stored in the liver of animals?
Answer:
Glycogen.

Question 8.
Name two carbohydrates which can act as biofuels.
Answer:
starch and glycogen.

Question 9.
B – complex is an often prescribed vitamin. What is complex about it and what is its usefulness ?
Answer:
It is a group of vitamins which contains vitamins B1 B2, B6, B12, biotin, pantothenic acid, folic acid and nitotinic acid. Since it is not a single vitamin, but a group of vitamins, it is called vitamin B – complex. It is required to release energy from food and to promote healthy skin and muscles. Its deficiency causes beriberi (vit. B1 and pernicious anaemia (vit. B12).

Question 10.
Glucose forms an oxime but glucose pentaacetate does not. Explain.
Answer:
Glucose reacts with NH2OH via open chain form which has the free – CH = O group to form glucose oxime. Glucose pentaacetate, on the other hand, cannot be converted into the open chain form because its anomeric hydroxyl group (C1 – OH) is acetylated and hence does not form the oxime.