You can Download Chapter 10 Haloalkanes and Haloarenes Questions and Answers, Notes, 2nd PUC Chemistry Question Bank with Answers Karnataka State Board Solutions help you to revise complete Syllabus and score more marks in your examinations. 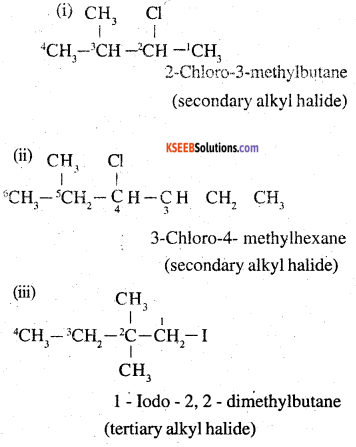 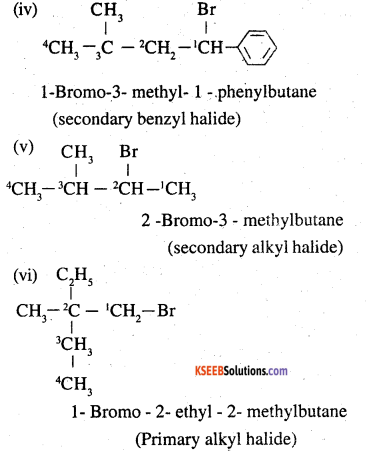 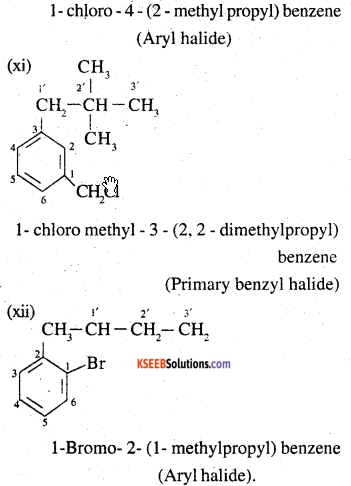 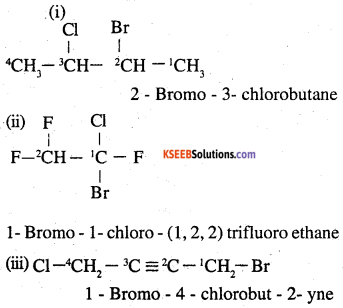 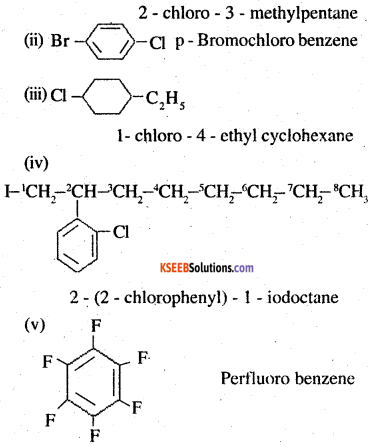 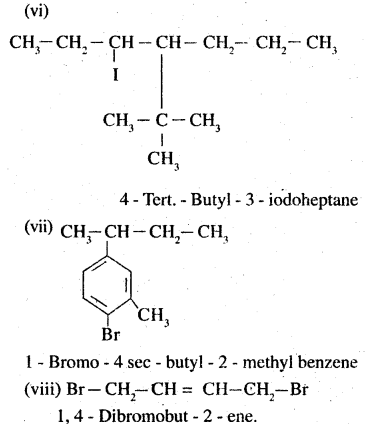 Question 4.
Which one of the following has the highest dipole moment?
(i) CH2Cl2
(ii) CHCl3
(iii) CCl4
Answer: 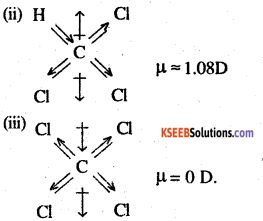 CCl4 is a symmetrical molecule. Therefore, the dipole moments of all four C-Cl bonds cancel each other. Hence its resultant dipole moment is zero. 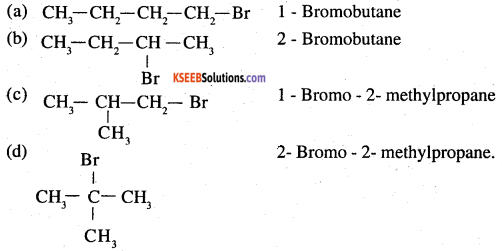 Question 7.
Write the equations for the preparation of 1-iodobutane from
(i) 1-butanol
(ii) 1-chlorobutane
(iii) but-l-ene.
Answer: 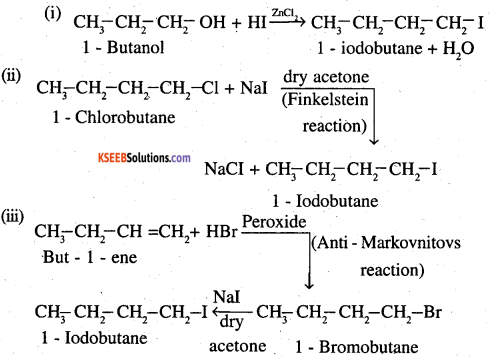 Question 9.
Which compound in each of the following pairs will react faster in SN2 reaction with OH?
1. CH3Br or CH3I
2. (CH3)3CCl or CH3Cl
Answer:
1. In the SN2 mechanism the reactivity of halides for the same alkyl group increase in the order. This happens because as the size increases the halide ion becomes a better leaving group.
R-F << R-Cl < R – Br < R-I
Therefore, CH3I will react faster than CH3Br in SN2 reaction with image 17.

Question 10.
Predict all the alkenes that would be formed by dehydrohalogenation of the following halides with sodium ethoxide in ethanol and identify the major alkene:
1. 1-Bromo-l-methylcyclohexane
2. 2-Chloro-2-methylbutane ,
3. 2,2,3-Trimethyl-3-bromopentane.
Answer:
1.

In this compound, all β hydrogens are equivalent thus dehydrohalogenation gives only one alkene.

In the given compound, there are two different sets of equivalent P – hydrogen atoms labelled as ‘a’ and ‘b’ thus dehydrohalogenation yields two alkenes. 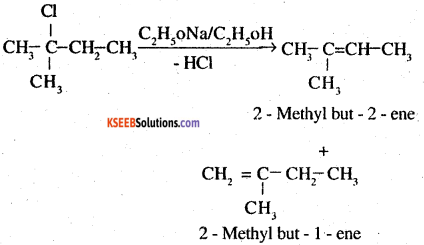 Sayt zeff’s rule implies that in dehydrohalogenate reactions, the alkene having a greater number of alkyl groups attached to a doubly bonded carbon atoms is preferably produced.
Therefore, 2-methyl but – 2- ene is the major product in the reaction.

In the given compound, there are two different sets of equivalent P – hydrogen atoms labelled as ‘a’ and ‘b Thus dehydrogenation of the compound yields two alkenes. 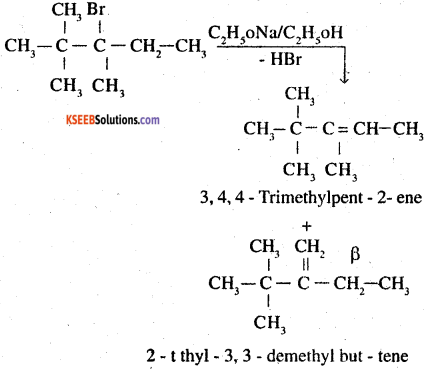 Question 11.
How will you bring about the following conversions?
(i) Ethanol to but-l-yne
(ii) Ethane to bromoethene
(iii) Propene to 1-nitropropane
(iv) Toluene to benzyl alcohol
(v) Propene to propyne
(vi) Ethanol to ethyl fluoride
(vii) Bromomethane to propanone
(viii) But-l-ene to but-2-ene
(ix) 1-ChIorobutane to n-octane
(x) Benzene to biphenyl.
Answer: 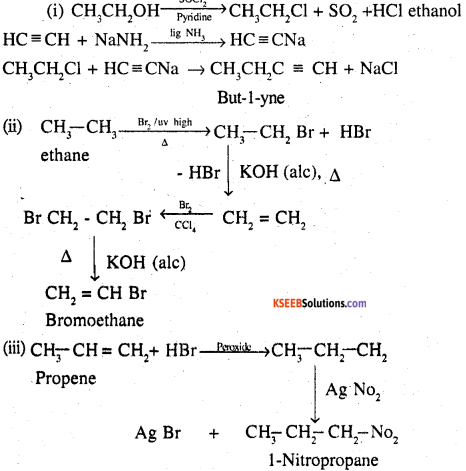 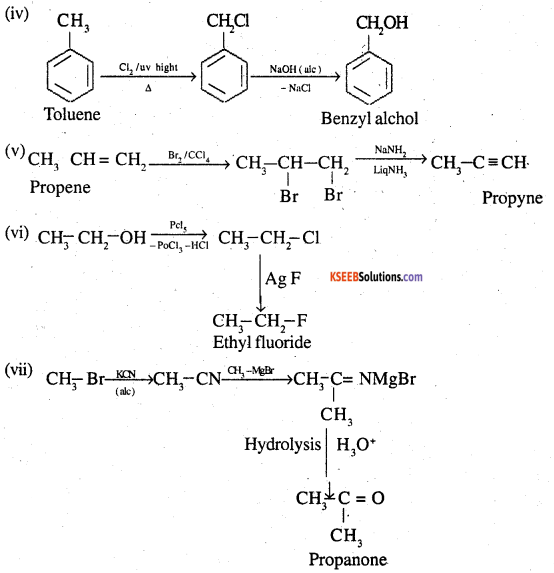 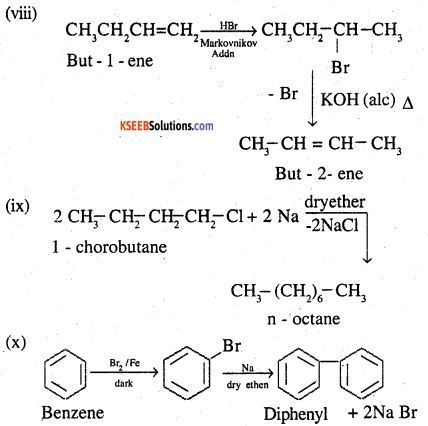 Question 12.
Explain why
1. The dipole moment of chlorobenzene is lower than that of cyclohexyl chloride?
2. Alkyl halides, though polar, are immiscible with water?
3. Grignard reagents should be prepared under anhydrous conditions?
Answer:
1.

Question 13.
Give the uses of freon 12, DDT, carbon tetrachloride and iodoform.
Answer:
Uses of freon – 12:
Freon -12 (dichlorodifluoromethane, CF2Cl2) is commonly known as CFC. It is used as a refrigerant in refrigerators and air conditioners. It is also used in aerosol spray propellants such as body sprays, hair sprays etc. However, it damages the ozone layer. Hence its manufacture is banned.

Uses of DDT:
DDT (p, p – dichlorodiphenylchloroethane) is one of the best known pesticides. It is very effective against mosquito and lice. However, due to its harmful effects, its manufacture is banned;
Uses of carbon tetrachlorides (CCl4):

Uses of iodoform (CHI3):
Iodoform was used as an antiseptic, but now it has been replaced by other formulations containing iodine-due to its objectionable smell. The antiseptic property of CHI3 is only due to the liberation of free iodine when it comes in contact with the skin.

Question 14.
Write the structure of the major organic product in each of the following reactions: 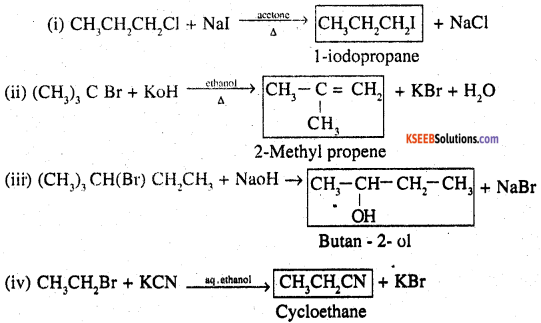 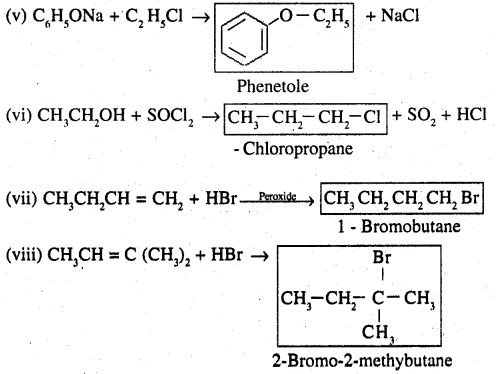 Question 15.
Write the mechanism of the following reaction:

Answer:
The given reaction is

The reaction is an SN2 reaction. In this reaction, CN– acts as the nucleophile and attacks the carbon atom to which Br is attacked. CN– is an ambident nucleophile and can attack through both C and N. In this case, it attacks through the C-atom.

An SN2 reaction involves the approaching of the nucleophile to the carbon atom to which the leaving group is attached. When the nucleophile is sterically hindered, then the reactivity towards SN2 displacement decreases. Due to the presence of substituents, hindrance tp the approaching nucleophile increases in the following order.
1- Bromopentane < 2-bromopentane < 2 – Bromo-2-methyl butane
Hence, the increasing order of reactivity towards SN2 displacement is
2- Bromo – 2- methyl butane < 2-bromopentane < 1-Bromopentane

Question 17.
Out of C6H5CH2Cl and C6H5CHClC6H5, which is more easily hydrolysed by aqueous KOH?
Answer: 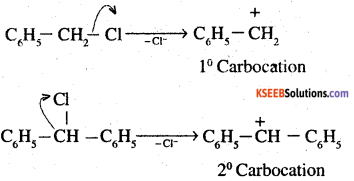 Question 18.
p-Dichlorobenzene has higher m.p. and solubility than those of o- and m-isomers. Discuss.
Answer: 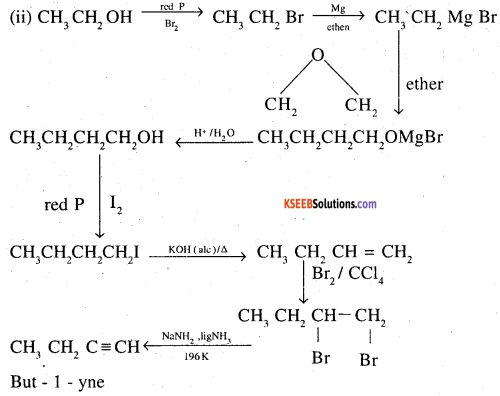 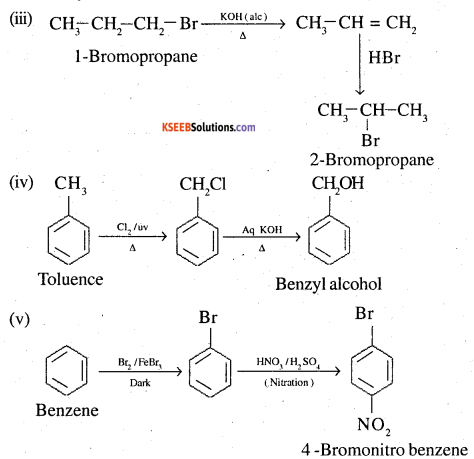 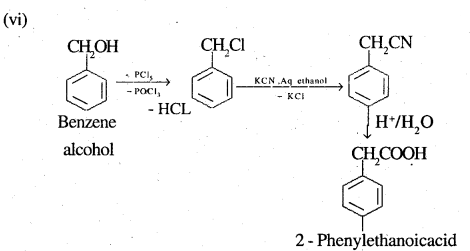 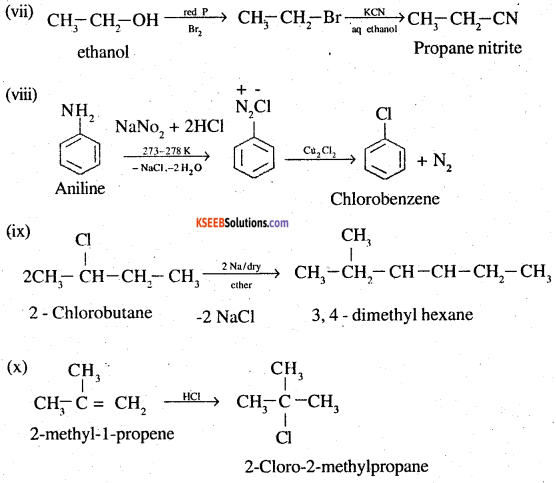 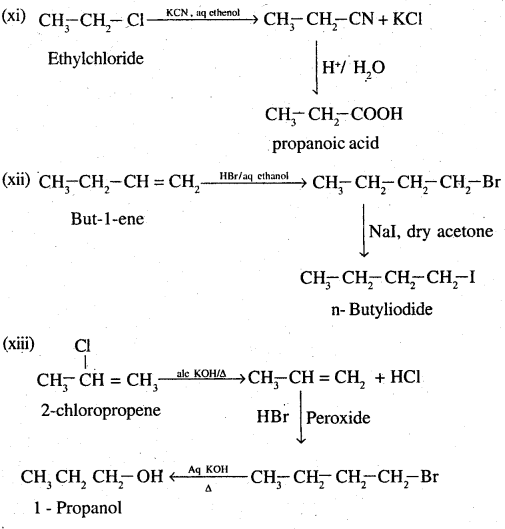 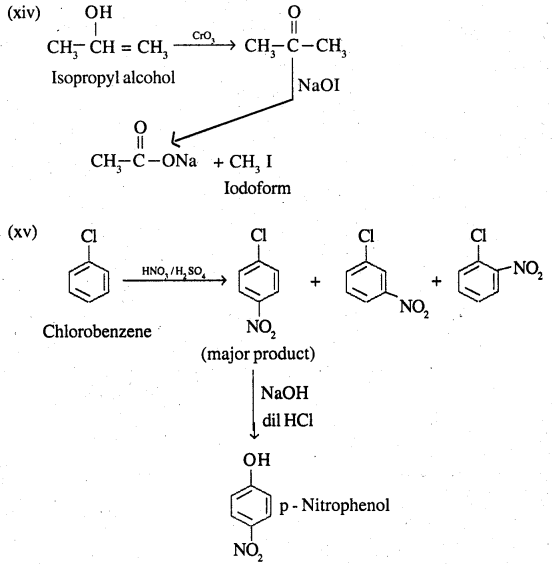 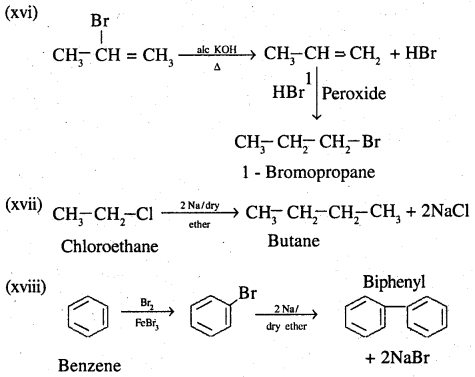 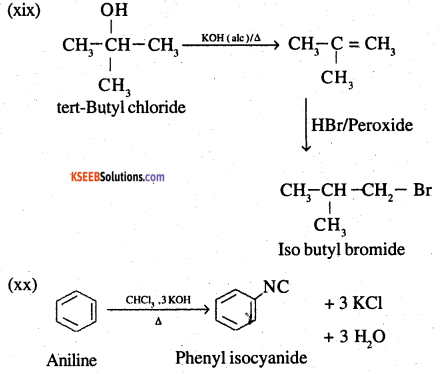 Question 20.
The treatment of alkyl chlorides with aqueous KOH leads to the formation of alcohols but in the presence of alcoholic KOH, alkenes are major products. Explain.
Answer:
In an aqueous solution, KOH almost completely ionises to give OH– ions. OH– ions is a strong nucleophile, which leads the alkyl chloride to undergo a substitution reaction to form alcohol.

On the other hand, an alcoholic soln of KOH contains alkoxide (RO–) ion, which is a strong base. Thus, it can abstract a hydrogen from the β – carbon of the alkyl chloride and form an alkene by eliminating a molecule of HCl.

OH– ion is a much weaker base than RO– ion. Also, OH– ion is highly solvated in an aqueous solution and as a result the basic character of OH’ ion decreases. Therefore, it cannot abstract a hydrogen from β – carbon.

Since (a) reacts with Na to give a compound C8H18 which is different from the compound formed
when n – butyl bromide is reacted with Na, (a) has to be isobutyl bromide. 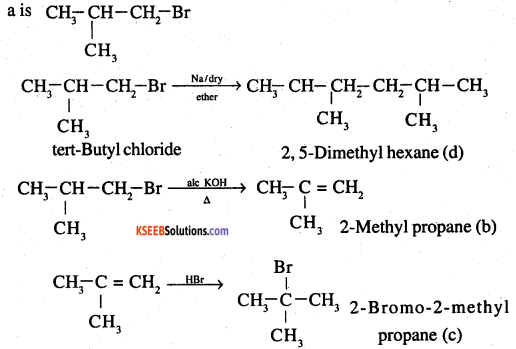 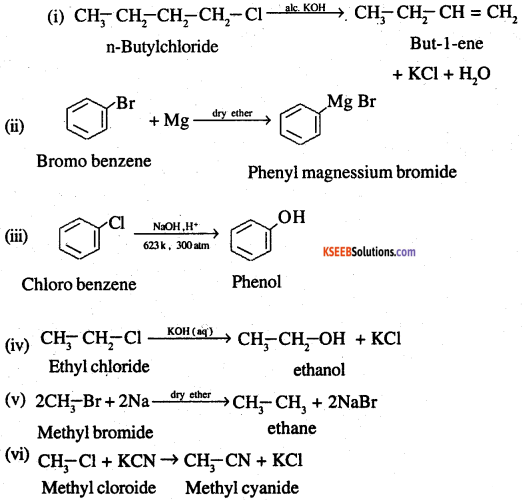