You can Download Chapter 1 The Solid State Questions and Answers, Notes, 2nd PUC Chemistry Question Bank with Answers Karnataka State Board Solutions help you to revise complete Syllabus and score more marks in your examinations.

Question 1
Define the term ‘amorphous’. Give a few examples of amorphous solids.
Answer:
Amorphous solids are those solids in which the constituent particles may have short range order but do not have a long range order. They have irregular shapes and are isotropic in nature. They do not undergo a clean cleavage.They do not have sharp melting points or definite heat of fusion. E.g.: Glass, rubber and plastics.

Question 2.
What makes a glass different from a solid such as quartz? Under what conditions could quartz be converted into glass?
Answer:
Glass is an amorphous solid in which the constituent particles (SiO4 tetrahedra) have only short range order and there is no long range order. On melting quartz and then cooling it rapidly, it is converted into glass.

Question 5.
How can you determine the atomic mass of an unknown metal if you know its density and the dimension of its unit cell? Explain.
Answer:
The atomic mass can be determined using the formula

where
ρ is the density of the metal, a is the dimension of the unit cell, N0 is Avogadro number and Z is the number of atoms in the unit cell.

Question 6.
(a) ‘Stability of a crystal is reflected in the magnitude of its melting points’.
(b) The melting points of some compounds are given below:
Water = 273K, ethyl alcohol = 155.7 K, Diethyl ether = 156.8K, Methane = 90.5K.
What can you say about intermolecular forces between these molecules?
Answer:
(a) Higher the melting point, greater are tire “forces holding the constituent particles together and hence greater is the stability.

(b) The intermolecular forces in water and ethyl alcohol are mainly hydrogen bonding. Higher melting point of water than alcohol shows that hydrogen bonding in ethyl alcohol molecules is not as strong as in water molecules. Diethyl ether is a polar molecule. The intermolecular forces present in them are dipole -dipole attraction. Methane is a non-polar molecule. The only forces present in them are the weak Vander Waal’s forces (London / dispersion forces).

Question 7.
How will you distinguish between the following pairs of terms:
(i) Hexagonal close-packing and cubic close-packing?
(ii) Crystal lattice and unit cell?
(iii) Tetrahedral void and octahedral void?
Answer:
(i) When a third layer is placed over the second layer in such a way that the spheres cover the tetrahedral or ‘C’ voids, a three dimensional closest packing is obtained where the spheres in every third or alternate layers are vertically aligned (i.e. the third layer is directly above the first, the fourth above the second layer or so on) calling the first layer as layer A and the second layer as layer B, the arrangement is ABAB pattern or hexagonal close packing.

When the third layer is placed over the second layer in such a way that spheres cover the octahedral or ‘d’ voids, a layer differentfrom layers A and B is produced. Let us call it as layer C, continuing further, a packing is obtained were the spheres in every fourth layer will be vertically aligned. This pattern of stocking spheres is called ABCABC… pattern or close cube packing (CCP).

(ii) A regular three dimensional arrangement of points in space is called crystal lattice.
Unit cell is the smallest portion of a crystal lattice which, when repeated in different directions, generates the entire lattice.

(iii) Wherever a sphere of the second layer is above the void of the first layer (or vice versa) a tetrahedral void is formed. These voids are called tetrahedral voids because a tetrahedron is formed when the center of these four spheres arejoined.
The voids which are surrounded by six spheres is called octahedral voids.

Question 9.
Explain:
(i) The basis of similarities and differences between metallic and ionic crystals.
(ii) Ionic solids are hard and brittle.
Answer:
(a) Similarities (i) Both ionic and metallic crystals have electrostatic forces of attraction. In ionic crystals, these are between the oppositely charged ions. In metals, these are among valence electrons and the kernels. That is why both have high melting point.

(ii) Ionic bond is strong due to electrostatic forces of attraction.
Metalic bond may be weak or strong depending on the number of valance electrons and size of the kernels.

Question 10.
Calculate the efficiency of packing in case of a metal crystal for
(i) simple cubic
(ii) body-centred cubic
(iii) face-centred cubic
(with the assumptions that atoms are touching each other).
Answer:
(i) 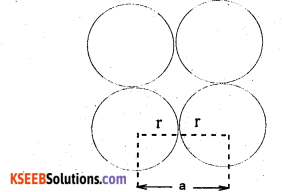 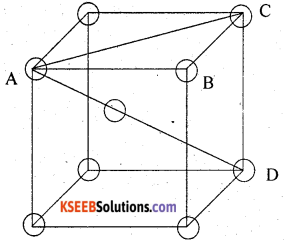 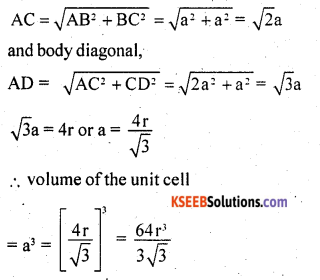 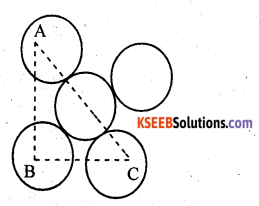 A,B,C are the centres of the sphere . As sphere on the face centre is touching the spheres at the corners evidently AC = 4r
But from right angled triangle ABC

∴ volume of the unit cell

Question 12.
A cubic solid ¡s made of two elements P and Q. Atoms of Q are at the corners of the cube and P at the bodycentre. What is the formula of the compound? What are the coordination numbers of P and Q?
Answer:
As atoms Q are present at the 8 corners of the cube, therefore, number of atoms of in the unit cell = \(\frac { 1 }{ 8 }\) × 8 = 1
As atoms P are present at the body centre, therefore, number of atoms of x in the unit cell = 1
∴Ratio of atoms x:y =1:1
Hence the fonnula of the compound is PQ coordination number of each of P and Q = 8. 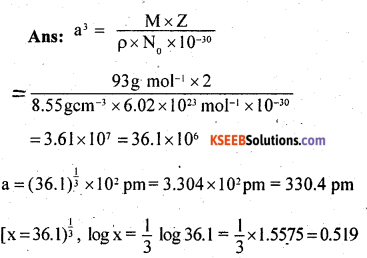 Question 14.
If the radius of the octahedral void is r and radius of the atoms in close packing is R, derive relation between r and R.
Answer: 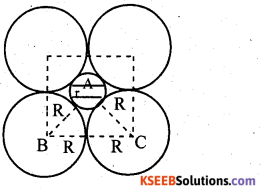 A sphere fitting into the octahedral void is shown by shaded circle. A sphere above and a sphere below this small (shaded) sphere have not been shown in the figure. Obviously, ABC is a right angled triangle. Applying Pythagoras theorem,
BC2 = AB2 + BC2 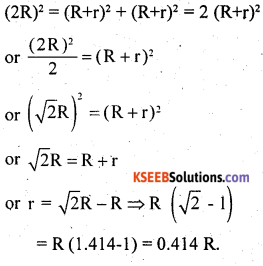 Question 15.
Copper crystallises into a fee lattice with edge length 3.61 x 10-8 cm. Show that the calculated density is in agreement with its measured value of 8.92 g cm-3.
Answer: 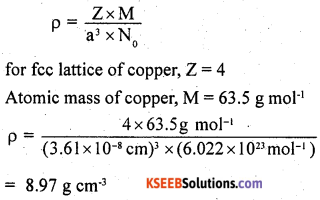 which is in close agreement with the measured value. 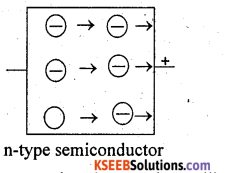 (ii) p-type semiconductor: when a silicon crystal is doped with atoms of group-13 elements, such as B, Al, Ga or In, each impurity atom forms only three covalent bonds with the host atoms. The place where the fourth electron is missing t is called a hole which moves through the crystal like a positive charge and hence increases its conductivity. Silicon that has been doped with group-13 element is p-type semiconductor. 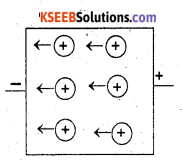 Question 18.
Non-stoichiometric cuprous oxide, Cu2O can be prepared in laboratory. In this oxide, copper to oxygen ratio is slightly less than 2:1. Can you account for the fact that this substance is a p-type semiconductor?
Answer:
The ratio less than 2:1 in Cu2O shows that some cuprous (Cu+) ions have been replaced by cupric (Cu2+) ions. To maintain electrical neutrality, every two Cu+ ions will be replaced by one Cu2+ ion thereby creating a hole. As conduction will be due to presence of these positive holes, hence it is a p-type semiconductor.

Question 23.
Explain the following terms with suitable examples:
(i) Schottky defect
(ii) Frenkel defect
(iii) Interstitials and
(iv) F-centres.
Answer:
(i) Schottky defect:
It arises due to the missing of equal number of cations and anions from their normal positions leaving behind a pair of holes. This defect is usually observed in ionic compounds having high coordination number and ions of almost similar size. The density of the crystal is lowered due to the presence of vacancies in the crystal lattice. Schottky defect increases slightly the electrical conductance of the crystal. E.g. NaCl, KC1, CsCl.

(ii) Frenkel defect:
It arises w’hen an ion, usually cation, leaves its normal site and occupies an interstitial site. This defect is usually observed in ionic ‘ compounds having low co-ordination number , and crystals with anions are much larger in size than the cations. Since no ions are missing from the crystals as whole, it doesn’t affect the density of the crystal.
E.g.: AgCl, ZnS, AgBr

(iii) Interstitials:
Atoms or ions which occupy the normally vacant interstitial positions in a crystal are called interstitials.

(iv) F-centres:
The electron occupying holes, created by missing of anions from the lattice sites are called F-centres. These F-centres are responsible for colour of compound.

(iv) These are substances which are expected to possess paramagnetism or ferromagnetism on the basis of unpaired electrons but they actually possess zero net magnetic moment. It arises due to the alignment of magnetic moments in opposite direction in a compensatory manner resulting a zero magnetic moment.

(v) Germanium and silicon are group 14 elements and have a characteristic valance of four and form four bonds as in diamond. A large variety of solid state materials have been prepared by combination of groups 13 and 15 or 12 and 16 to stimulate average valence of four as Ge or Si. Typical compounds of group 13 -15 are InSb, A1P and GaAs. Gallium arsenide (GaAs) semiconductors have very fast response and have revelutionised semi – conductor devices. ZnS, CdS, CdSe and HgTe are examples of group 12 – 16 compounds. In. these compounds, the bonds are not perfectly covalent and the ionic character depends on the electronegativities of the two elements.

Question 2.
How can you convert NaCl structure into CsCl structure and vice versa.
Answer:
NaCl structure can be converted into CsCl. structure by application of pressure while the reverse can be done by heating to 760 k.

Question 3.
How does amorphous silica differ from quartz?
Answer:
In amorphous Silica, SiO4 tetrahedra are randomly joined to each other whereas in quartz, they are linked in a regular manner.

Question 5.
What is the effect of the presence of Schottky defects on the density of a crystal?
Answer:
The density of the crystal decreases.

Question 6.
Name one Solid which has both Schottky and Frenkel defects. !
Answer:
Silver bromide (AgBr).

Question 7.
What is Frenkel, defect?
Answer:
When some ions (usually cations) are missing from the lattice sites and they occupy the interstitial sites so that electrical neutrality as well as stoichiometric ratio is maintained, it is called Frenkel defect.

Question 8.
Why does the conductivity of metals decrease with rise of temperature?
Answer:
The kernals begin to vibrate in the path of the flow of electrons creating hinderance in the flow.

Question 11.
Why are amorphous solids to be considered as supercooled liquids?
Answer:

Question 1.
Refractive index of a solid is observed to have the same value along all directions. Comment on the nature of solid. Would it show cleavage property?
Answer:
As the solid has same value of refractive index along all directions. This means that it is isotropic and hence amorphous. Being an amorphous solid, it would not show a clean cleavage when cut with a knife. Instead it would
break into pieces with irregular surfaces.

Question 3.
Name the parameters that characterize a unit cell.
Answer:
A unit cell is characterized by following six parameters: (i) The dimensions of the unit cell along the three edges. These are represented by a, b and c. The edges may or may not be mutually perpendicular. (ii) The angles between the edges. These are represented by α, β  and γ. The angle α  is. between b and c, β is between a and c and γ
is between a and b.

Question 4.
What type of defect can arise when a solid is heated? Which physical property is effected and in what way?
Answer:
When a solid is heated, vacancy defect is produced in the crystal. This is because of heating, some atoms or ions leave the lattice site completely, i.e. some lattice site becomes vacant. As a result of this defect, the density of the substance decreases because some atoms/ions leave the crystal completely.