Question 2.
Van’t Hoffs factor for a solution is less than one. What is the conclusion drawn from it?
Answer:

Question 3.
How many Faraday of electricity is required to reduce 1 mole of MnO4 ions to Mn2+ ions?
Answer:
5 Faradays.

Question 4.
If the unit of the rate constant of a reaction is mol-1 LS-1 then mention its order.
Answer:
Second-order.

Question 12.
Draw a neat labeled diagram of H2 – O2 fuel cell. Write the reaction that occurs at the cathode of the cell.
Answer:

Question 17.
Given an example each for
(a) Artificial sweetening agents
(b) Narcotic analgesics.
Answer:
(a) Chemical compounds which give sweet taste without adding calories.
Ex: Aspartame, Saccharin, Sucralose, Alitame.

Question 18.
What are cationic detergents? Give an example.
Answer:
Cationic detergents are quaternary ammonium salts of amines with acetates, chlorides or bromides as anions.
Ex: Cetyltrimethylammonium bromide

These are used in hair conditioners.

Question 19.
Explain the process of obtaining “blister copper” from “copper matte” with equations.
Answer:
Copper matte is a mixture of a cuprous suiphide and little quantity of ferrous Sulphide.
Copper matte along with some quantity of silica is taken in the converter in which hot air is blown.
(a) Remaining ferrous suiphide oxidizes to ferrous oxide, which in turn combines with silica to form slag ferrous silicate
2FeS + 3O2 → 2FeO + 2SO2
FeO + SiO2 → FeSiO3

Question 21.
(a) How is ozonized oxygen prepared in the laboratory? Give an equation.
(b) Give the composition of “Oleum”.
Answer:
When slow dry steam of oxygen is passed through a silent electrical discharge conversion of oxygen to ozone takes place. The product is known as ozonized oxygen.
3O2 → 2O3, ∆H = +142 kJ mol-1

Question 24.
(a) Why 3d-series of elements act as good catalysts?
Answer:
Interstitial compounds are those which are formed by the transitional element when small atoms like H, C, and N are trapped inside the crystal lattices of metals.
Example: VH0.5

Question 25.
With the help of the Valence Bond Theory (VBT), explain hybridization, geometry, and magnetic property of [NiCl4]2-.
Answer:
(i) Orbitals of Ni2+ ion

(iii) 4 pairs of electrons one from each, occupy the four hybrid orbitals. The complex has tetrahedral geometry and paramagnetic because of two unpaired electrons. 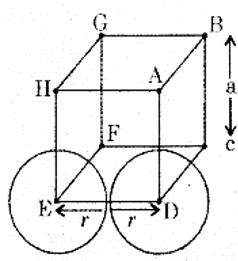 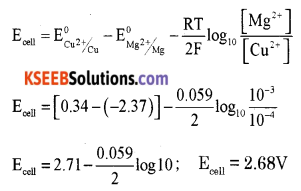 (b) Draw a graph of potential energy V/S reaction co-ordinates showing the effect of catalyst on activation energy (Ea) of a reaction.
Answer: 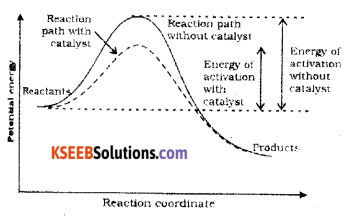 Example (2): Combination of hydrogen and nitrogen to form ammonia.

Step 2: The carbocation is then attacked by a nucleophile (OH–) on either side to form tert-butyl alcohol.

(b) Explain the Fitting reaction.
Answer:
when aryl halide treated with sodium in ether medium two aryl groups join together to form biphenyl.

(c) Name the reagent used in the dehydrohalogenation of haloalkanes.
Answer:
Alcoholic KOH.

Question 33.
(a) Write the mechanism of acid-catalyzed dehydration of ethanol to ethene.
Answer:
Step 1: Formation of protonated alcohol

Step 3: Formation of ethene by the elimination of a proton

(b) Between phenol and alcohol which is more acidic? Why?
Answer:
Phenols are more acidic than alcohols. This is because the phenoxide ion formed from the ionization of phenol is stabilized by resonance.

Question 34.
(a) Explain Rosenmund reduction with the equation.
Answer:
When benzoyl chloride (acid chloride) is hydrogenated with catalyst palladium on barium sulphate, benzaldehyde is obtained.

(b) How does propanone (CH3COCH3) react with hydrazine? Give an equation.
Answer:
Propanone undergoes a nucleophilic addition reaction with hydrazine forming addition product Hydrazone.

(b) How does nitrobenzene is reduced to aniline? Give an equation.
Answer:
Nitro compounds are reduced to amines by pacing hydrogen ga in the presence of finely divided nickel, palladium, or platinum catalyst.

(c) Write the IUPAC name of

Question 36.
(a) Write the Haworth structure of “Lactose”.
Answer: 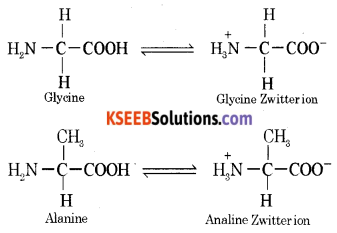 (c) Name the nitrogenous base present in RNA but not in DNA.
Answer:
Uracil

Question 37.
(a) Explain the preparation of Nylon-6, 6 with the equation.
Answer:
It is obtained by the condensation polymerization of hexamethylene diamine with adipic acid under high pressure and at high temperatures. 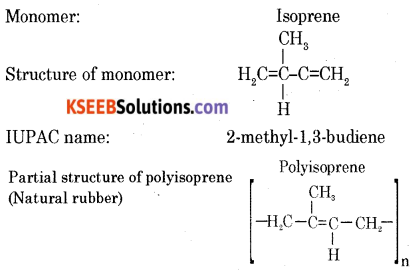