You can Download Chapter 11 Biotechnology: Principles and Processes Questions and Answers, 1st PUC Biology Question Bank with Answers, Karnataka State Board Solutions help you to revise complete Syllabus and score more marks in your examinations.

Question 1.
Can you list 10 recombinant proteins which are used in medical practice? Find out where they are used as therapeutics (use the internet).
Answer:

Question 2.
Make a chart (with diagrammatic representation) showing a restriction enzyme, the substrate . DNA on which it acts, the site at which it cuts DNA and the product it produces.
Answer: 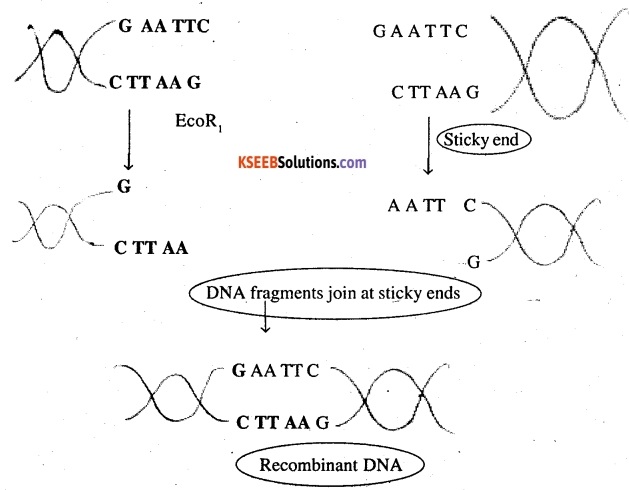 Question 3.
From what you have learnt, can you tell whether enzymes are bigger or DNA is bigger in molecular size? How did you know?
Answer:
DNA molecules are biggest biomolecules containing number of genes. A gene operates through synthesis of polypeptide. An enzyme is formed of one or few polypeptides. It is always smaller than DNA which contains hundreds of genes. 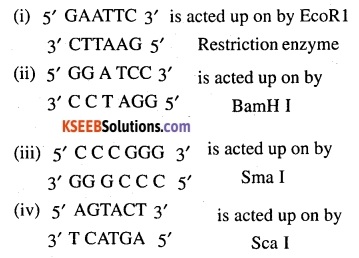 Question 8.
Can you recall meiosis and indicate at what stage a recombinant DNA is made?
Answer:
Pachytene of meioses I

(b) Bio Reactor:
Bio reactor used in biotechnology is generally 100-1000 litre cylindrical metal. container with a curved base to facilitate mixing of contents. The culture medium containing all nutrients, salts vitamins, hormones etc. is added along with inoculum of transformed cells with recombinant DNA. A stirrer helps in mixing and optimum availability of nutrients to culture cells. Supply of oxygen is maintained if the cells function better under aerobic conditions. Foam is kept under control. Gadgets are attached for knowing temperature and pH of the contents. Corrections are made when required. There is a sampling port where small volume of culture can be withdrawn to know the growth of cells and concentration of extractable product.

(c) Downstream processing:
It is the recovery of product from fully grown genetically modified cells, its purification and preservation. It is carried out after the sampling report indicates the completion of biosynthetic phase and presence of optimum product in the cells. After leaving a part of cellular mass of inoculum, the rest is crushed and chemically treated to separate the product. The separated product is purified and then formulated with suitable preservatives. Clinical traits are carried out to know its used and any immediate or long term adverse effect. Every batch of the product has to pass through strict quality control testing. Of course, the procedure and vigour of downstream processing and quality control varies from product to product.

Question 11.
Explain briefly
(a) PCR
(b) Restriction enzymes and DNA
(c) Chitinase
Answer:
(a) PCR:
PCR stands for Polymerase chain reaction. In this reaction multiple copies of the gene (DNA) of interest is synthesized in vitro using two sets of primers (small chemically synthesized oligonucleotides that are complementary to the region of DNA) and the enzyme DNA polymerase. The enzyme extends the primers using the nucleotides provided in the reaction and the genomic DNA as template. Then the process of replication of DNA is repeated many times i.e. one billion copies are made.

(c) Chitinase:
It is an enzyme obtained from fungus Trichoderma which is specialised to digest chitin of fungal cell walls. The enzyme is used both as an effective fungicide as well as dissolving fungal cell walls to obtain their protoplasts for separation of DNA is genetic engineering.

Question 12.
Discuss with your teacher and find out how to distinguish between
(a) Plasmid DNA and Chromosomal DNA
(b) RNA and DNA
(c) Exonuclease and Endonuclease
Answer:

(a) Plasmid DNA and Chromosomal DNA

Question 2.
What is biotechnology?
Answer:
It is a branch of science that deals with techniques of using live organisms or enzymes from organisms, to produce products and processes useful to humans.

Question 3.
What is a plasmid? (Delhi 2008)
Answer:
A plasmid is an autonomously replicating circular extra chromosomal DNA found in bacterial cell.

Question 7.
Write the function of restriction enzyme in bacterial cell?
Answer:
Responsible for restricting the growth of bacteriophage.

Question 10.
Name the enzymes used to digest the cell wall of bacteria and fungi for genetic engineering.
Answer:

Question 13.
What is gene therapy?
Answer:
It is the replacement of a defective gene by normal healthy and functional gene. This method helps to overcome the effect of various disorders like sickle cell anaemia, alkaptonuria, SCID, colour blindness etc.

Question 14.
Why does a cloning vector requires a selectable marker?
Answer:
Because it helps in identifying and selecting the recombinants and eliminating the non-recombinants.

Question 15.
What is amplification.
Answer:
It is the process of making multiple copies of gene/DNA segments of interest.

Question 16.
What is recombinant protein?
Answer:
It is biochemical compound or useful protein produced inside the heterologous host cell by recombinant biotechnology method.

Question 17.
What is bioreactor or fermenter?
Answer:
It is a container in which biochemical process is carried out by using living cells and their growth medium.

Question 18.
What meant by bioconversion?
Answer:
It is the process by which raw materials are biologically converted into specific products using microbes, plant or animal cells and or their enzymes.

Question 3.
Name the particular technique in biotechnology whose steps are shown in figure use the figure to summaries the technique in three steps.
Answer:

Question 3.
Name the particular technique in biotechnology whose steps are shown in figure use the figure to summaries the technique in three steps.
Answer: 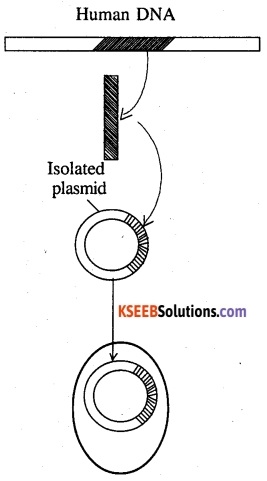 (a) Recombinant technology
(b)

Question 4.
Refer the diagram and answer the following
(i) From what T1– plasmid is obtained?
(ii) Name the enzyme which is involved in step I
(iii) What happens in step II
(iv) The plant produced is called hybrid or transgenic
(v) Will the plant produced have other genes along with desired genes? Yes or No explain.
Answer: 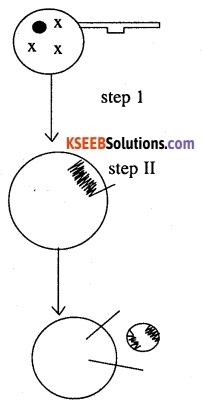 Study the linking of DNA fragments shown above
(i) Name “a” DNA and “b” DNA
(ii) Name the restriction enzymes that recognizes this palindrome
(iii) Name the enzyme that can link these two DNA fragments (CBSE 2008)
Answer:
(i) (a) – vector DNA
(b) – foreign DNA 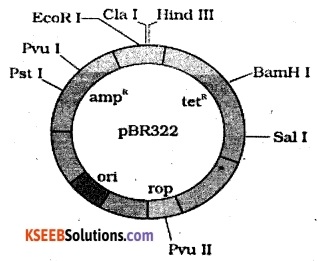 Notice that the top strand is the same as the bottom strand but reads backward. When the enzyme cut the strand between G and A, it leaves overhanging chains

(A) What is the symmetrical sequence of DNA known as?
(B) What is the significance of these over hanging chains?
(C) Name the restriction enzyme that cuts the strand between G and A.
Answer:
(A) Palindromic sequence
(B) sticky ends
(C) Eco RI

Question 8.
Name any two cloning vectors. Describe the features required to facilitate cloning into a vector.
Answer:
a.

Question 9.
What are cloning vectors? What functions do these vectors perform?
Answer:
Cloning vectors are those organisms on their DNAs which can multiply independently of the host DNA and increase their copy number along with the alien DNA attached to them. Functions are:

Question 10.
Name the organism from where the thermostable DNA polymerase is isolated. Write the importance of this enzyme is genetic engineering.
Answer:
Thermits acquaticus. This enzyme can remain active even during the high temperature induced denaturation of the double stranded DNA occurs.

Question 11.
How do “Ori” and “Cloning site” facilitate cloning into a vector? (AI 2008)
Answer:
“Ori” is a specific sequence of DNA, where replication occurs; the alien DNA must be linked to it, if it has to replicate. The restriction site where a foreign DNA is linked is called “cloning site”. 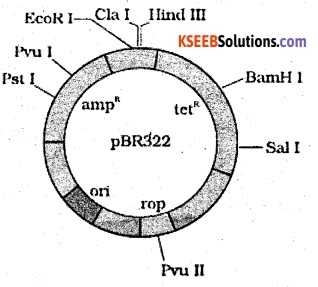 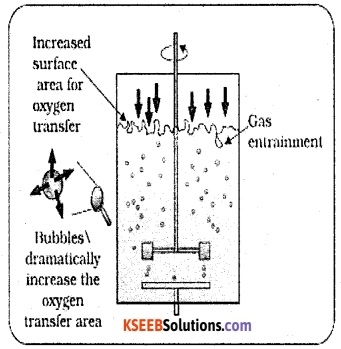 Question 4.
Read the following base sequence of a certain DNA strand and answer the questions that follow.

(i) What is called “Palindromic sequence” in a bNA?
(ii) Write the Palindromic nucleotide sequence shown in the DNA strand given and mention the enzyme that will recognise such a sequence.
(iii) State the significance of enzymes that identify palindromic nucleotide sequences.
(AI – 2008)
Answer:
(i) A palindromic sequence of DNA is a sequence of base pairs that reads the same on the two strands, when orientation of reading is kept the same, i.e. in the 5′ → 3′ direction.
(ii) 5′ GAA TT C – 3′
3′ CTTA AG – 5′
This sequence is restricted by the restriction enzyme Eco RI
(iii) The enzyme that identifies the palindromic nucletide sequence cut the strands between the same 2 bases, more often producing sticky ends; hence they are useful in the formation of recombinant DNA.

Question 1.
Describe in detail the components of a simple stirred tank bioreactor along with a labelled diagram.
Answer:
A stiered tank bioreactor is usually a cylindrical vessel with a curved base to facilitate the mixing of the content. The stirrer facilitates even mixing and oxygen availability through out the bioreactor. 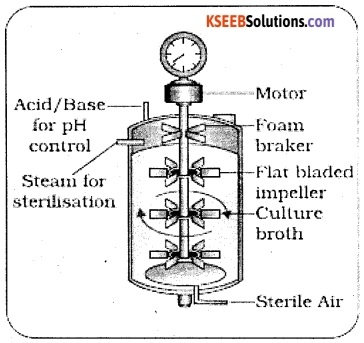 Question 2.
In a bacterial culture, some of the colonies produced blue colour in the presence of a chromogenic substrate and some did not due to the presence or absence of an insert (r DNA) in the coding sequence of (3 – galactosidase).
(a) Mention the mechanism and the steps involved in the above experiment.
(b) How is it advantageous over simultaneous plating on two plates having different antibiotics.
Answer:
(a) The mechanism involved is called insertional inactivation, the phenomenon in which the enzyme becomes inactivated when a recombinant DNA is inserted with in the coding sequence of that enzyme.
Steps in process:

(b) Advantage:
Simultaneous plating method is quite cumbersome as it requires two plates where as this method is simple and easy.

Question 3.
(a) If the restriction enzyme has to cut a DNA, the DNA must be in pure form, i.e. free from the associated RNA and proteins. How is it achieved.
(b) Represent only diagrammatically the steps in the recombinant DNA (r DNA) technology.
Answer:
(a) The RNAs are removed by using enzymes called ribonucleases (RNases) The proteins are removed by using enzyme proteases.
(b) 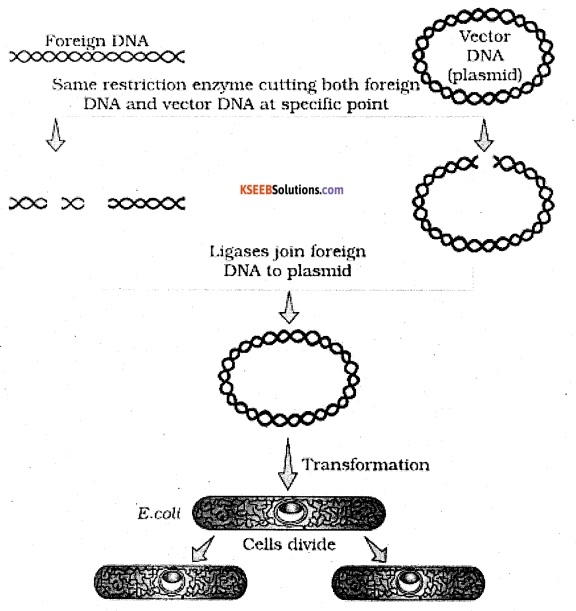 Question 4.
(a) Show only diagrammatically the three steps in the polymerase chain reaction,
(b) How is repeated amplification achieved using this method?
Answer: 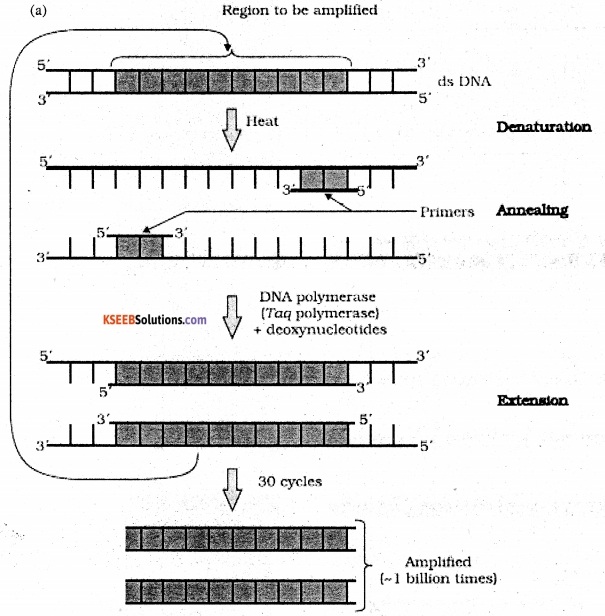 (b) Repeated amplification is achieved by the use of a thermostable DNA polymerase, it is isolated from the bacterium Thermus aquaticus. It remains active during the high temperature used for denaturation of the double-stranded DNA.

Question 5.
Make a diagrammatic representation of showing a restriction enzyme, the substrate DNA on u which it acts the site at which it cuts DNA and the product it produces.
Answer: 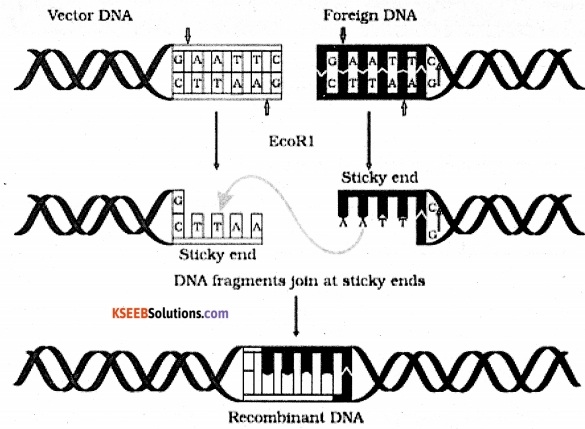