Question 2.
Name the layer of the uterus that exhibits strong contractions during parturition.
Answer:
Myometrium

Question 3.
Which chromosome of man has the least number of genes?
Answer:
Y chromosome.

Question 5.
Give an example for an inter-specific hybrid animal.
Answer:
Mule.

Question 9.
What is the main aim of Montreal Protocol?
Answer:
To reduce the depletion or thinning of ozone layer.

Question 10.
Name the type of food chain that is the major conduit for energy flow in an aquatic ecosystem.
Answer:
Grazing food chain / GFC.

Question 13.
What are the conclusions drawn by T.H. Morgan from the crossing experiments in Drosophila with respect to linkage.
Answer:
Physical association of genes on a chromosome is termed as linkage.
The more closely the genes are found on chromosomes greater is the linkage less closely the genes are found on chromosome lesser is the linkage.
Original needed (O.S of Human Health and dieases strategies in improvement of crop).

Question 14.
What is an allergy? Name the two chemicals released by mast cells in the body during allergy.
Answer:
The exaggerated response of the immune system to. certain antigen (foreign substance) percent in the environment.
Drugs: Antihistamine, Adrenalin and Steroids.

Question 15.
Mention the four traits for which plant breeding is done.
Answer:

Question 16.
With an example, explain the convention for naming restriction endonucleases scientifically.
Answer:
Naming REN, Principles:
Three letter code is given for each REN. First letter represents the genus name of Bacteria with capital letter and subsequent two letters with small letter will be the species name. Ex: Eco, Hin etc., Next letter represents the strain, and roman number indicates the order in which the enzymes were isolated from the same organism. Ex: Hind III Eco RI Bam HI.
Each REN cut DNA at specific 4 to 6 base pairs sequence known as ‘Palindrome Suquences’.

Question 17.
A prey develops defense against a predator. Justify the statement with two examples in animals. Prey species have evolved to avoid Predators. Ex: Camouflage
Answer:
1. Some frogs and insects are cryptically coloured to avoid being detected easily by Predators.
2. Some species are poisonous to avoid Predators. Ex: Monarch butterfly is highly distasteful to predator bird. This distaste is due to chemical present in the body which is acquired during their caterpillar stage by feeding on a poisonous weed.

Divergent Evolution: The same structure developed along different direction due to adaptations to different need. This is divergent evolution and these structures are homologous.
Eg: Thorns and tendrils of Bougainvillea and Cucurbita.

Question 23.
What are carcinogens? Mention any two groups of carcinogens with one example for each.
Answer:
The agents which causes cancer are called carcinogens.

b) With reference to gel electrophoresis, what is elution?
Answer:
The separated bands of DNA are cut out from the agarose gel and extracted from the gel piece is called elution.

Question 27.
What is megasporogenesis? , Explain the development of eight nucleate embryosac in flowering plants.
Answer:
The process of formation of megaspore from Megaspore Mother Cell, (MMC), through meiosis is known as megasporogenesis. MMC is large nucleated with dense cytoplasm. It undergoes meiosis, which results in the production of 4 megaspores. Out of 4, 3 degenerates and one megaspore is functional which develops into female gametophyte. “Method of embryo sac formation from a single megaspore is known as Monosporic type of development”.

pole forming 2- Nucleate embryo sac. The developing embryo sac enlarges in size due to formation of vacuole in the centre.

One nucleus from micropylar end, one from chalazal end migrate towards the centre and fuse to form (2n) diploid secondary nucleus.
Thus a typical angiosperm embryosac at maturity though 8 nucleate, it is 7 celled.

2. Natural method : It works on the principle of avoiding the chances of sperms and ovum meeting together. There are two types – periodic abstinence (physiological or rhythm method),Abstinence from intercourse during this ‘fertile period’ (danger period), i.e., between 10th and 17th day of menstrual cycle) and withdrawal method (coitus interruptus – Male partner withdrawing his penis from vagina just before ejaculation).

4. Intra – uterine devices (IUDs) :
Intra uterine device is a small flexible plastic or rubber or copper object which is inserted into the uterus to prevent conception. They may be non-medicated IUDs (e.g., Lippes loop), copper releasing IUDs (CuT, CU7, Multiload 375) or hormone releasing IUDs (progestasert, LNG – 20). They bring about contraception by different ways.

5. oral Contraception (Hormonal method) : This is contraceptive method in which ‘pills’ are taken orally by females. These pills contain progestogens or progestogen – estrogen combinations that inhibit the secretion of FSH and LH and thus prevent the maturation of graafian follicle and ovulation.

6. Implants and inheritable : These are progestrogens or progestogen – estrogen combinations that are uses under the skin by females,. Their function similar to that of oral’ contraceptives (prevent maturation of graafian follicle and ovulation) 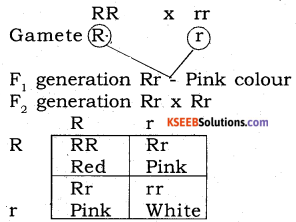 Question 30.
(a) Explain the role of three , organisms as biocontrol agents.
(b) What is the significance of BOD?
(c) Given an example for fungus found in mycorrhia.
Answer:
(a) The ladybird beetle is used to control aphids. Dragonflies are used to control mosquitoes.
Dried spores of these to bacteria Bacillus thuringiensis are mixed with water and sprayed onto vulnerable plants such as brassicas and fruit trees. Their toxin is released in the gut of insect (butterfly) larvae which feed on the spores. This kills the caterpillars.

Trichoderma species, a free-living fungus in the roots of many plants is used to control several plant pathogens.
Baculoviruses like nucleo- polyhedrovirus are species specific and are used as biocontrol agents against insects and other arthropods.
(b) It is a measure of organic matter present in water / sewage Or it indicates whether the water sample is polluted or not
(c) Glomus.

Question 32.
(a) Tropical region has greater biodiversity than temperate region. Justify the statement with three reasons.
(b) The use of CNG is better than petrol or diesel. Give four reasons.
Answer:
(a) Temperate regions have been subjected to frequent glaciations in the past whereas, tropical latitudes have remained relatively undisturbed for millions of years. Therefore, tropical regions had a long evolutionary time for species diversification.

Tropical environments are less seasonal, relatively more constant and predictable.
Such constant environments promote niche specialisation and lead to a greater species diversity.
There is more solar energy available in the tropics, which contributes to higher productivity.
This in turn might contribute indirectly to greater diversity.

Answer any three of the following questions in about 200 to 250 words each wherever applicable: ( 3 x 5 = 15 )
Question 33.
(a)Write the schematic representation of spermatogenesis. ( 3 )
(b) Write the two events that occur in the ovary and uterus during the follicular phase of menstrual cycle.  ( 2 )
Answer: 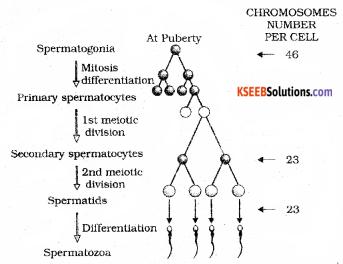 Meselson and Stahl conducted experiments on E.coli to prove that DNA replication is semi conservative.

(b) Mention two assumptions of Oparin and Haldane with reference to ‘Origin of Life’. 2
Answer:
The first form of life could have come from pre-existing non-living organic molecules.
Formation of life was preceded by chemical evolution (formation of diverse organic molecules from inorganic constituents).

(b) Write two suspended activities in animals against abiotic stresses with suitable examples. 2
Answer:
1. Hibernation (winter sleep):
It is a supressed metabolic state of an organism to avoid winter season
Eg: Bears going into hibernation in winter.

3. Diapause:
It is the delay in the delopment during adverse enviornmental condition.
Eg: Many zooplanktons undergoes a stage of suspended development in unfavourable conditions

(c) Among vertebrates, which group of animals has the highest number in global biodiversity. 1
Answer:
Fish.