Question 3.
Mention the importance of selectable markers in plasmids.
Answer:
It helps in identifying and eliminating non-transformants or selectively permitting the growth of the transformants.

Question 4.
Which is the fish caught in South Africa in 1938, which was thought to be extinct?
Answer:
Coelacanth

Question 5.
Name the hormone released by the ovary in the later phase of pregnancy.
Answer:
Relaxin

Question 6.
Why meristems are preferred in tissue culture?
Answer:
The meristem is free of virus i.e., in tissue culture if the plant is infected with a virus, by removing meristem one can grow virus-free plants.

Question 7.
Mention the type of antibody present in the colostrum.
Answer:
IgA.

Question 8.
Why mammals of colder climate generally have shorter ears and limbs?
Answer:
To minimise heat loss from the body.

Question 12.
What is the test cross? Write its significance.
Answer:
It is a kind of back cross where F1 plant is crossed with its recessive parent.
It helps in finding F1 plant is homozygous or heterozygous.

Question 13.
What are analogous organs? Give an example.
Answer:
These are organs which Are different in structure and origin but perform similar functions.
Eg. Eyes of octopus and mammals.

Question 14.
Mention the objectives of biofortification. .
Answer:
Objectives of improving

Question 15.
Draw a neat labelled diagram of the structure of an antibody.
Answer: 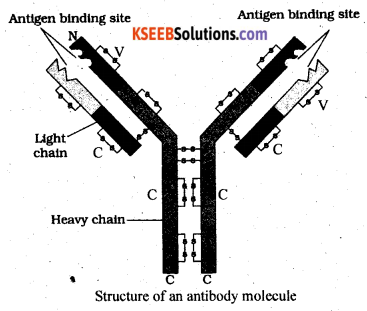 Question 17.
Name any two species which have become extinct due to overexploitation.
Answer:

Question 18.
What are the sacred groves? Name any two sacred groves of India.
Answer:
Sacred grooves are large tracts of forests where trees and wildlife within are conserved due to cultural and religious beliefs.
Eg.: Khasi and Jainta hills in Meghalaya 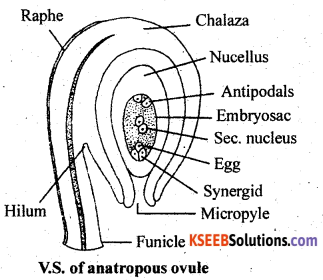 Question 23.
What are the ecological pyramids? Draw an ideal pyramid of energy and mention its units.
Answer:
Pyramid of Energy: It is a graphic representation of available energy at successive trophic levels in a food chain. The energy level is expressed as kilocalorie. It is the typical upright pyramid. It illustrates decreasing energy level at successive trophic levels from producers at the base to the consumers. The energy level is maximum in producers and less in consumers. e.g.: Pond food chain. 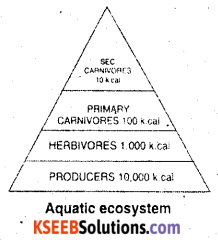 Question 24.
What is a biopsy test? Mention any two techniques of cancer detection and diagnosis.
Answer:
A thin piece of the suspected tissue is stained and examined under a microscope.

Question 25.
Write the important use of the following in rDNA technology.

Question 27.
(a) What are false fruits? Give an example. (2)
Answer:
The fruits develop from the ovary and thalamus.
Eg.: Apple, cashew

(b) Write the characteristic features of insect-pollinated flowers. (3)
Answer: 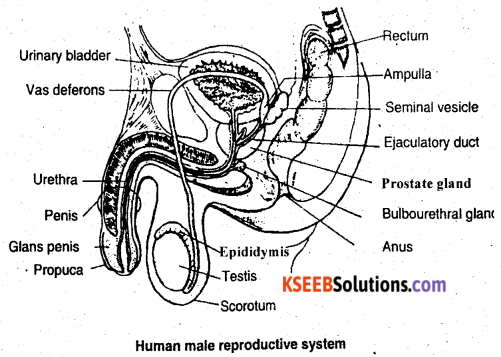 Question 29.
(a) Explain the following assisted reproductive technologies:
(i) IVF-ET
(ii) ZIFT
(iii) ICSI (1 + 1 + 1)
Answer:
(a) (i) IVE-ET: The fertilisation outside the body of the mother in a simulated condition. The transfer, of the embryo to the fallopian tube or uterus of a surrogate mother.
(ii) ZIFT: Zygotes with 8 blastomeres are transferred into the fallopian tube.
(iii) ICSI: Sperm is directly injected into the ovum in the laboratory.

Question 31.
Describe the various steps of plant breeding programs.
Answer:
Plant breeding is the manipulation of plant species in order to create desired plant types that are better suited for cultivation, give better yields and are disease resistant.
(i) Collection of variability:
Collection and preservation of all the different wild varieties, species and closely related plants of the cultivated species is a pre-requisite for effective exploitation of natural genes available in the populations. This collection constitutes thé germplasm.

(ii) Evaluation and selection of parents:
The germplasm so collected is evaluated to identify’ plants with desirable characters.
The selected plants are multiplied and used in the process of hybridisation.
Pure lines are created (by repeated self-pollination) wherever possible and desirable.

(iii) Cross hybridisation of the selected parents:
It involves crossing of two plants which differ in one or more desirable characters to produce a hybrid having the characters of both the parents.
This is a very time-consuming and tedious process.
Also, it is not necessary that the hybrids will combine the desirable characters.

(iv) Selection and testing of superior recombinants:
First, the individuals with the desired combination of characters have to be selected from among th progeny of hybrids.
Such hybrids are superior to both of the parents (hybrid vigour/heterosis).
They are self-pollinated for several generations till they reach a state of homozygosity so that there will be no segregation of characters in the progeny.

(v) Testing, release and commercialisation of new cultivars:
(a) Evaluation:
The selected lines are evaluated for their yield and other agronomy traits, disease resistance, etc.
Evaluation is done by growing these plants in the research fields and recording their performance under ideal conditions of irrigation, application of fertilisers and other crop management practices.

(b) Testing:
The plants selected after evaluation are tested in the farmers’ fields for at least three growing seasons, at several locations in the country, representing different agroclimatic zones, where the crop is normally grown.
The material is evaluated in comparison to the best available local cultivar as reference material.

(c) Release:
The material thus selected is certified and released as a variety.

Question 33.
What are VNTR’s? Mention the steps to detect VNTR’s in identifying criminals in forensic investigations.
Answer:
The DNA fragments that show very high degree polymorphism.

Question 34.
(a) Draw a neat labelled diagram of the typical biogas plant. (3)
Answer: 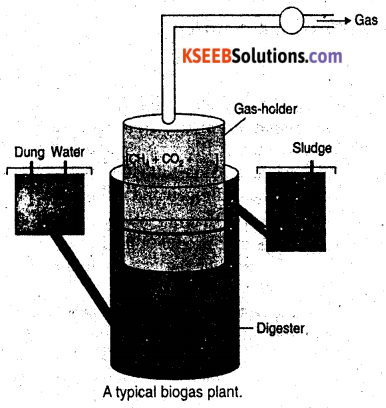 (b) Mention the beneficial role of anaerobic bacteria in secondary sewage treatment.
Answer:
Anaerobic bacteria digest the bacteria and fungi (FLOCS) in the sludge. During this digestion, bacteria produce a mixture of gases such as methane, hydrogen sulphide and carbon dioxide. These gases form biogas & can be used as a source of energy.

Question 35.
List the benefits, of transgenic animals.
Answer:
1. Normal physiology and development: Transgenic animals can be specifically designed to allow the study of how genes are regulated, and how they affect the normal functions of the body and its development.

2. Study of disease: Many transgeñic animals are designed to increase our understanding of how genes contribute to the development of the disease. e.g.: Cancer, cystic fibrosis, rheumatoid arthritis and Alzheimer’s.

4. Vaccine safety: Safety of vaccines must be confirmed before they are administered. e.g.: Transgenic mice are being used to test the safety of the polio vaccine. 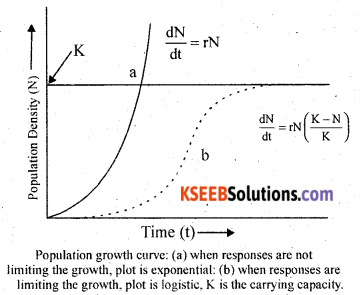 (c) What is sexual deceit? (1)
Answer:
One petal of Ophrys resembles a female bee in size. So male bee pseudocopulation with the flower. It is brown as sexual deceit.

Question 37.
Write a short note on the following :