Question 2.
Define adaptive radiation
Answer:
It is the evolution of different animals in different direction from a common ancestor adapting to different ecological niches. It is also called as divergent evolution.

Question 4.
What is green revolution?
Answer:
The dramatic increase in food production due to improvement of high yielding and disease resistant crop varieties is called green revolution.

Question 7.
Breast feeding during the initial period of infant growth is recommended. Give reason?
Answer:
The yellowish milk (colostrum) secreted from mammary glands during the initial days contains antibodies (IgA) to boost the development of immune system of the child.

Question 8.
Give an example for chemical carcinogen that causes cancer.
Answer:
Alcohol or tobacco or coal tar or coal gas or asbestos cement etc

Question 9.
What is totipotency?
Answer:
The capacity to generate a whole plant from any cell or explant is called totipotency

Question 10.
How do birds cope with temporary fluctuations in their environmental conditions?
Answer:
They migrate to hospitable areas for food and breeding purposes during unfavourable conditions in their habitat.

Question 12.
What is Biochemical Oxygen Demand (BOD)? Mention its significance.
Answer:
BOD refers to the amount of oxygen that would be consumed if all the organic matter in one liter of water were oxidized by bacteria.

Question 13.
Differentiate test cross and out cross.
Answer:
Test cross
It is a cross between F1 hybrid and homozygous recessive parent.

Out cross
It is a cross between F1 hybrid and homozygous dominant parent.

Question 14.
Give two examples for natural selection in organisms.
Answer:

Single cell proteins (SCP) are alternative source of proteins used to feed the ever increasing population with protein rich diet to overcome the problems of protein malnutrition.

Question 17.
Draw a diagram of sparged tank bioreactor and label the parts.
Answer: 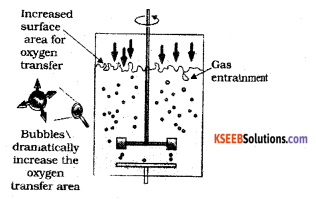 Question 18.
Explain the mechanism of action of restriction endonucleases.
Answer:
Restriction endonucleases recognize a specific base sequence of a DNA molecule.
They cut double stranded DNA at different sites. This generates protruding (51 or 31) ends. Such ends are called cohesive or sticky ends. These ends can join with single stranded sequences of other DNA having complementary base pairs.
E.g. EcoRI, Bam H1

Cuts symmetrically placed around the line of symmetry

Question 19.
Describe the different phases of life cycle.
Answer:
Juvenile phase
The period of growth from birth till individual attains sexual maturity is called Juvenile phase. It is known as vegetative phase in plants.

Senescent phase
The phase begins after reproductive phase and marks the end of growth cycle in organisms.

Question 20.
Give a brief account of Human Origin and evolution.
Answer:

Question 22.
What is food chain? Describe the types of food chain.
Answer:
The transfer of food energy from producers to decomposers through a series of organisms with repeated eating and being eaten is called food chain.
1. Grazing food chain
The food chain begins with producers (green plants) at the first trophic level. It involves grazing Of grass by herbivores and flow of energy occurs from smaller organisms (herbivores) to larger animals (consumers). It is based on prey – predator relationship and is therefore, called predator food chain.
Grass → Deer → Tiger

2. Parasitic food chain
The food chain begins with producers and flow of energy goes from larger organisms (host) to smaller organisms (parasites) as parasites draw nourishment from the host. This is based on host – parasite relationship.

3. Detritus or saprophytic food chain
The food chain begins with dead and decaying organic matter (detritus). Which is acted upon by decomposers or saprophytes and energy from decomposers goes to detrivores.
Leaf litter → Earth worm → bird → hawk

Question 23.
Define the terms
(a) Emasculation
Answer:
The removal of anthers from the flower bud of a bisexual flower before the anther dehisces is called emasculation.

(b) Bagging
Answer:
The process of covering the emasculated flowers with a bag of suitable size to prevent contamination with unwanted pollen is called bagging.

Question 24.
What is transformation? Explain any two methods of introduction of recombinant DNA in to host organism.
Answer:
Transformation is the process by which plasmid or DNA can be introduced into a cell.

1. Gene gun or particle gun or Biolistics method
It is a popular and widely used direct gene transfer method for delivering foreign genes into any cells and tissues or even intact seedlings.

2. Micro injection
In this technique a solution of DNA is directly injected in to the host nucleus using a fine micro capillary pipette or micro syringe, under a phase contrast microscope to aid vision.

Question 25.
Define trophic level. Show schematically the different tropic levels in a food chain.
Answer:
The amount of energy available at each step in food chain is called Trophic level. 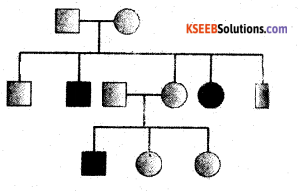 2. ZIFT ( Zygote intra fallopian transfer)
Zygote or early embryo up to eight blastomeres is transferred into the fallopian tube.

3. Gamete intra fallopian transfer (GIFT)
Transfer of an ovum collected from a donor to fallopian tube of another female who cannot produce ova, but provide suitable conditions for fertilization and further development up to parturition.

4. Intra uterine transfer (IUT)
Embryo with more than eight blastomeres is transferred in to the uterus.

5. Intra cytoplasmic sperm injection (ICSI)
The sperm is directly injected into the cytoplasm of the ovum to form an embryo in the laboratory and then embryo transfer is carried out.

Question 28.
What is dihybrid cross? State and explain Mendel’s second law of independent assortment.
Answer:
When a cross is made between two parents differing in two pairs of contrasting characters like round yellow and wrinkled green is called dihybrid cross. 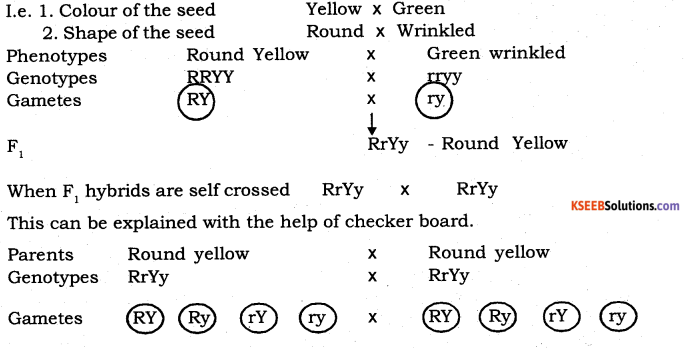 Question 29.
What is meant by semi conservative replication? How did Meselson and Stahl prove it experimentally?
Answer: 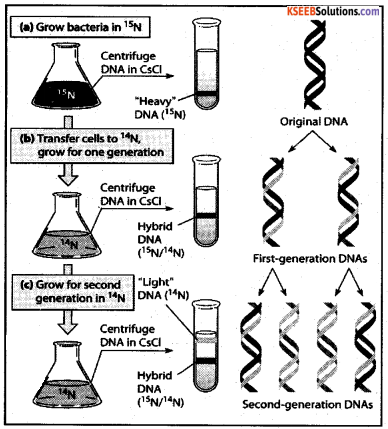 It is a process by which DNA produces daughter DNA molecules, which are exact copies of the original DNA. In each new DNA molecule, one strand is old (original) while the other is newly formed. Hence, Watson and Crick described this method as semi-conservative replication.

Meselson and Stahl conducted experiments on E.coli to prove that DNA replication is semi conservative.

Question 30.
What is water pollution? Write short notes on the following with respect to water pollution.
a) Eutrophication
b) Biomagnifications
Answer:
Any undesirable change in the physical, chemical and biological characteristics of water, which makes water unfit for human use and harmfully affect aquatic organisms is called water pollution.

a) Eutrophication
It the process of nutrient enrichment of water bodies and subsequent loss of species diversity like fishes.
Harmful effects

Question 31.
Explain the structure of an anatropous ovule with a neat labeled diagram.
Answer:

Ovule is the female gametophyte develops inside the ovary from a cushion like structure called placenta. It is attached to placenta by a stalk known as funicle. The nutritive tissue enclosed inside the ovule is the nucellus. Nucellus is surrounded by outer and inner integuments. These integu-ments leave a small pore at the anterior end called micropyle. Anterior end of the ovule is micropyle chalazal end is the posterior part.

Question 32.
Distinguish DNA and RNA with respect to their structure or Chemistry and function.
Answer:

Principle
It is based on prey – predator relationship.

Examples
1. Ladybird and Dragon flies useful to get rid of aphids and mosquitoes.

2. Bacillus thuringiensis (Bt) is used to control butterfly caterpillar. Spores available in sachets are mixed with water and sprayed on plants, eaten by insect larva, toxin released in gut kills larvae.
Example: Bt toxin genes are introduced into cotton plants and made resistant to insect pests such as cotton boll worms, stem borer, aphids and beetles.

3. Nucleo polyhedrovirus ( NPV) is a virus suitable for narrow spectrum insecticide applications. It has no negative impacts on plants, mammals, birds, fish or target insects. It is suitable for overall integrated pest Management programme (IPM) in ecologically sensitive areas.

Question 34.
What is logistic growth? Explain sigmoid curve with a suitable diagram.
Answer:
The rate of population growth slows as the population size approaches carrying capacity, leveling to a constant level. 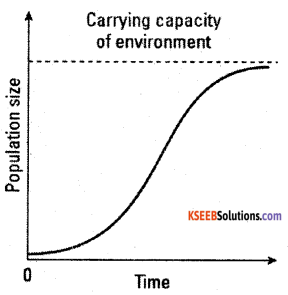 Logistic growth curve or S-shaped growth curve (sigmoid growth curve) is characteristic of all higher animals including man and microbes like yeast cells growing in a natural environment.

Logistic growth is a pattern of growth in which the population density of few individuals introduced into the new habitat increases slowly initially, in a positive acceleration phase (lag phase) then increases rapidly, approaching an exponential growth rate (log phase) due to abundance of food, favourable environmental conditions such a climate, few predators and low levels of disease. Then declines in a negative acceleration phase.

This decline reflects increasing environmental resistance at higher population densities. This type of population growth is termed density-dependent, since growth rate depends on the numbers present in the population. The point of stabilization, or zero growth rates, is termed the saturation value or carrying capacity (K) of the environment for that organism.

When population growth rate is plotted graphically against time S shaped or sigmoid curve is obtained. This type of population growth is also called Verhulst- pearl logistic growth.
The mathematical equation for sigmoid growth is
dN / dt = rN(N – K) / k
Where
N = Population size at a given time
t = Time,
r = intrinsic rate of natural increase
k = Saturation value or carrying capacity for that organism in that environment.

Question 35.
What is animal breeding? Explain the controlled methods of animal breeding and mention their significance.
Answer:
The production of new varieties of animals which are superior to their parents through selective breeding or mating is called animal breeding.
There are two control breeding methods

Artificial insemination
Semen of superior male is collected and-injected unto the reproductive tract of selected female. 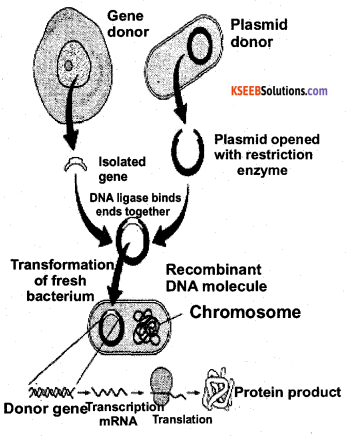 Question 37.
What is gametogenesis? Mention the types. Explain spermatogenesis with a schematic representation.
Answer:
The process of formation of haploid male and female gametes in gonads is called gametogenesis.
It is of two types 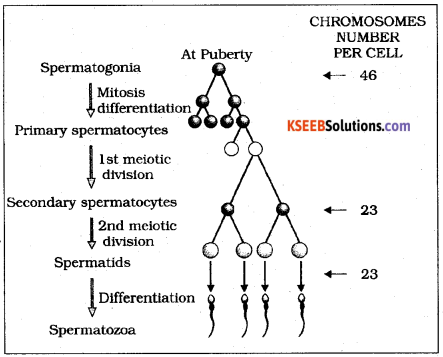 1. Multiplication phase (mitosis)
Each testis is composed of numerous seminiferous tubules. Epithelial cells lining these tubules are called germinal epithelium. At the time of gametogenesis some cells of the epithelium become active, detach from the layer and start dividing mitotically to produce large number of primordial germ cells (2n), in turn primordial germ cells undergo repeated mitotic divisions to form sperm mother cells or spermatogonial cells which are diploid in nature.

2. Growth phase
Some of the spermatogonial cells (2n) stop dividing and enter into the seminiferous tubule where they grow in size by accumulating cytoplasm and duplication of DNA; sertoli or nurse cells provide necessary nutrients for the growing sperm mother cells, now sperm mother cells are termed as primary spermatocytes.