Question 1.
Define parthenogenesis.
Answer:
Development of the egg into a individual without fertilization.

Question 3.
How does repressor protein prevent the transcription of structural genes?
Answer:
Repressor protein bends to the operator region of the operon and prevents RNA polymerase from transcribing the operon.

Question 4.
Electrophoresis is an essential procedure that needs to be employed in genetic fingerprinting why?
Answer:
Required to separate DNA fragments obtained restriction enzyme digestion.

Question 5.
What are biofertilisers?
Answer:
Biofertilizers are organisms that enrich the nutrient quality of soil.

Question 8.
Why is pyramid of energy always upright?
Answer:
When energy flows from a particular tropic level to the next trophic level, some energy is always lost as heat at each step.

Question 10.
Ozone layer in the stratosphere becomes thinner due to the release of CFCs. Give a scientific reason for this.
Answer:
UV rays at on CFCs and release Cl atoms which act as catalysts, degrade, ozone, and release molecular oxygen.

Question 11.
‘Unless foetal ejection reflex is produced, normal parturition does not occur’. Substanate the statement.
Answer:

Question 13.
What are multiple alleles? Why the alleles IA and IB for blood group are considered codominant?
Answer:
Multiple alleles:

Analogous organs :
Structures that are different in their basic anatomical structure and origin but appear but similar and perform similar functions.

Question 20.
Explain the structure of a mature female gametophyte in flowering plants.
Answer:

Question 21.
How do intra – uterine devices prevent conception in humans?

Mutation: It is the sudden hertitable change in genetic material which results in new genotypes and phenotypes, thus altering the gene frequency.

Genetic recombination: It occurs during gametogenesis (meiosis) and results in variations. This would result in gene frequency over a period of time.

Natural selection: Variations that occur as a result of mutations or recombinations or due to gene flow or genetic drift inhance reproductive success or fitness survivors would – leave more progeny and over a period of time the gene frequency of the population change.

Question 23.
What are carcinogens? Mention any two groups of carcinogens with an example for each.
Answer:
Carcinogens:
Agents that cause cancer are called carcinogens.

Question 24.
Differentiate out – crossing, cross breeding and inter specific hybridization.
Answer:
Out – crossing : It is the mating of the animals of the same breed but which have no common ancustors on either side of the pedigree up to 4 – 6 generations.

Cross breeding : It is the mating of superior males of one breed with superior females of another breed both with desirable characters).

Inter – specific hybridization : It is the mating of male and females of two different but related species.

Question 26.
Explain any three major causes of biodiversity loss.
Answer:
1. Habitat loss and fragmentation:
Many large habitats like forests have been destroyed by Man either for cultivation or for conversion to grasslands and broken up into small fragments which leads to the decline in the population of living organsims.

2. Over – Exploitation:
Over – Exploitation of natural resources for the purpose of food, shelter and other purposes and harvesting of many mareine fish populations by humans leads to the elimination of many species.

3. Allien species invasions:
Unintentional or deliberate introduction of allien species may cause the decline or extinction of indigenous species as they may turn invasive.

4. Co – extinctions:
When a species becomes extinct, the plant and animal species associated with it in an obligatory way also becomes estinct.

Question 27.
What is autogamy? Explain the devices that the plants have developed to prevent this.
Answer:
Autogamy:
Self pollination in which there is transfer of pollen grains from the anters to the stigma at the same flower.

Devices in flowering plants to prevent autogamy:
1. Release of pollen grains before the stigma becomes receptive or stigma becomes receptive much before the release of pollen grains.
2. Placement of anthers and stigma at different positions so that pollen cannot come in contact with the stigma of the same flower.
3. Self incompatibility – Genetic mechanism which inhibits the germination of pollen grain or growth of the pollen tube inside the style, thus preventing the fertilization process.
4. Unsexually : Production to unisexual flowers (male and female flowers on different plants or on the same plant).

Question 29.
Write the schematic representation of the life cycle of HIV.
Answer: 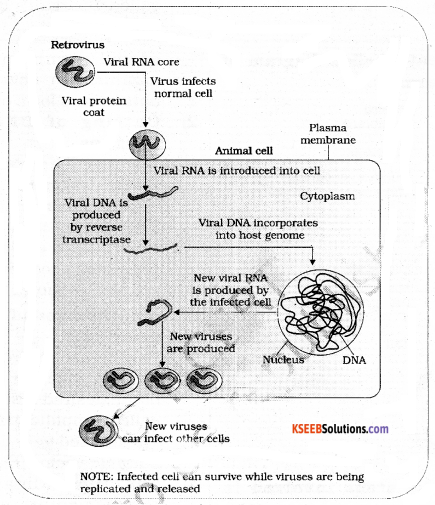 2. Cutting of DNA at specific locations

4. Insertion of recombinant DNA into host cell or organism

Question 31.
Briefly describe the different stages involved in decomposition.
Answer:
1. Fragmentation:
It is the break down detritus into smaller particles, by detritivores (earthworm).

2. Leaching:
It is the process in which water soluble inorganic nutrients go down into the soil horizon and get precipitated as unavailable salts.

3. Catabolism:
It is the process in which leads to bacterial and fungar enzymes degrade detritus into simpler inorganic substances.

4. Humification:
It is the process which leads to the accumulation of a dark coloured amorphous substance called humuns that is highly resistant to microbial action and undergoes very slow decomposition.

5. Mineralisation :
It is the degradation of humus by some microbes and the release of inorganic nutrients.

Question 32.
Explain five effects of water pollution.
Answer:
1. Sewage discharge, pollutes the water and makes it unfit for human use, decomposers in the aquatic ecosystem, decompose these pollutants and makes the water foul smelling.

2. The organic substances present in sewage are decomposed by decomposers aerobically as a result the oxygen content of the water decreases. This leads to biochemical oxygen demand (BOD). It kills large number of aquatic organisms.

3. Agricultural runoff Or excess wash from agricultural fields, carry pesticides and fertilizers to water bodies like lakes. The nutrient enrichment of lakes promotes the enormous growth of algae. This is called algal bloom; it blocks the free flow of water and O2 content and eventual death of aquatic organisms.

4. Industrial effluents discharged into ponds or lakes contain toxic substances, like mercury, DDT, etc. It is neither excreted nor metabolized, gradually they tend to accumulate in organisms through food chain. This is called biomagnification.

Biomagnifieation of DDT disturbs calcium metabolism in birds, which lay eggs with thin egg shell, it results in premature breaking and decline in bird population.

5. Oil slicks formed as a result of leakage of oils from ships carrying huge quantities of crude oil via sea routes, spread to several kilometers. It does not allow oxygen to penetrate into water and causes mass death of aquatic organisms.

6. The hot water discharged from thermal power stations or nuclear power stations into water bodies, increases the temperature; this results in evaporation of oxygen from the water surface leading to death of aquatic animals like fishes.

7. Sewage water contains many undesirable pathogenic microorganisms, when this water is discharged into nearby water bodies without proper treatment may cause outbreak of serious diseases like Jaundice, cholera, dysentery, typhoid, etc.

8. Industrial effluents released into surrounding land or into pits, percolate along with its chemicals into soil and contaminate ground water.

Question 33.
Draw the diagram of the sectional view of the female reproductive system in humans.
Answer: 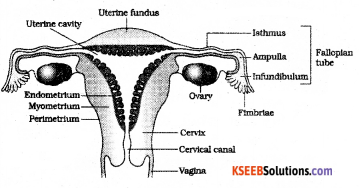 Question 34.
Explain Mendel’s experiment that describes the inheritance of one gene.
Answer: 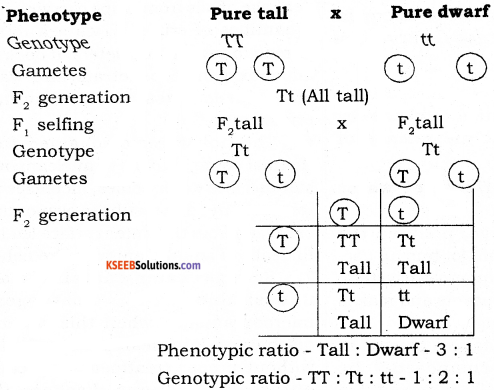 Based on the result of this monohybrid cross, Mendel put forward the law of segregation, i.e., factors or alleles for a pair of contrasting characters do not blend, but segregate or separate during gamete formation such that a gamete received only one of the factors (purity of gametes).

Question 35.
Draw a labelled diagram of a biogas plant.
Answer: 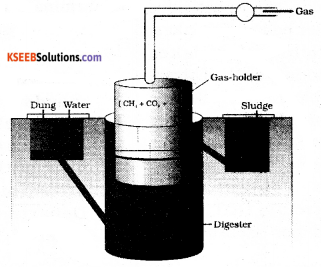 Question 36.
a) Explain the application of tissue culture in any three fields.    (3)
Answer:
Applications of tissues are :
1. Micropropagation:
It is used for the propagation / production of a large number of plants in short durations. Micropropagation produces somaclones (plants genetically identical to the original / parent plant).