Question 1.
What is physics?
Answer:
Physics deals with the laws of nature and natural phenomena associated with matter and energy.

Question 3.
What is the angle between velocity and acceleration at the peak point of a projectile projected for maximum range?
Answer:
– 90° or 270° 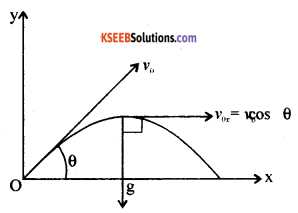 Question 6.
Which property of a body is responsible for regaining its shape and size when deforming force acting on it is removed?
Answer:
Elasticity.

Question 10.
What is the basis of the phenomenon of interference?
Answer:
The two interfering waves should be identical and superpose at a point at small angles (travelling in the same direction) so that modification of energy takes place at the point of superposition of waves.

Question 11.
What is parallax? Mention its use.
Answer:
Parallax is the change in the position of an object with respect to it background, when the object is seen from two different positions.
Parallax is used to determine long distance.

Question 14.
When is the work done negative? Give an example.
Answer:
If the force and the displacement are in opposite directions, then the work is said to be negative. Work done by a force against the gravity is negative.

Question 18.
On an average a human heart is found to beat 75 times in a minute. Calculate its frequency and time period.
Answer:
No. of beats = 75
Time taken = 1 minute = 60 second

Question 21.
Draw the stress verses strain graph for a metallic wire stretched up to fracture point. Define the terms proportional limit and fracture point.
Answer:
Statement: The ratio of stress to strain is a constant for a material within the elastic limit.Modulus of elasticity = \(\frac{\text { Stress }}{\text { Strain }}\) 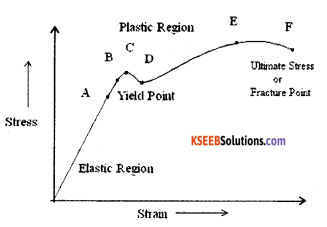 Question 23.
What is capillary rise? Write an expression for it. Explain the terms.
Answer:
A rise in a liquid above the level of zero pressure due to a net upward force produced by the attraction of the water molecules to a solid surface.

Question 25.
State and explain the law of thermal conduction.
Answer:
The quantity of heat conducted during the steady state is directly proportional to the,
(i) Area of cross-section of a conductor.
(ii) Temperature difference between the two points or ends (θ1 – θ2).
(iii) Time of passage of heat (t) and inversely proportional to the thickness or distance between the two ends of the conductor (d).
i.e., Q = \(\frac{\mathrm{KA}\left(\theta_{1}-\theta_{2}\right) \mathrm{t}}{\mathrm{d}}\)
where ’K’ is thermal conductivity of the material of the conductor.
The SI unit of thermal conductivity is Wm-1 K-1. 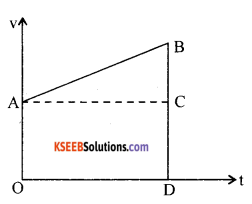 Question 28.
Derive the expression for maximum safe speed of a vehicle on a banked road in circular motion.
Answer:
From the figure, ‘θ’ is the angle of elevation of outer edge over the inner edge. ‘R’ is the normal reaction force. 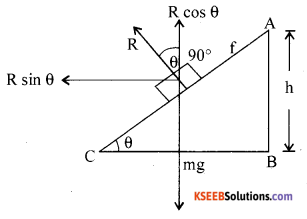 Question 30.
What is escape speed? Obtain the expression for escape speed. What is the value of escape speed for earth?
Answer:
It is the minimum speed needed for a free object to escape from the gravitational influence of a massive body.
For a satellite to escape into infinite orbit,
∆PE = PE∞ – PEr  ∵PE∞ = 0
But K.E = PE.
∆PE = \(-\left(-\frac{\mathrm{GMm}}{\mathrm{R}+\mathrm{h}}\right)\)

It is assumed that at infinite distance PE = 0, v1 = 0.
It is a free fall of an object from the point of infinity to a point on the surface in the absence of any frictional forces.

For V2 > V1, W > 0 and for V2 < V1, W < 0.
In an isothermal expansion, the gas absorbs heat and does work, while in an isothermal compression, work is done on the gas by the environment and heat is released.

Question 32.
What is simple harmonic motion? Derive an expression for velocity and acceleration in simple harmonic motion.
Answer:
A SHM is the simplest form of oscillatory motion in which the force on the oscillating particle or body is directly proportional to the displacement from the mean position and the force directed towards the mean position.
We know that, the displacement of the particle
y = A sin ωt
But v = \(\frac{d y}{d t}\)
∴v = \(\frac{d}{d t}\)(A sin ωt)
and acceleration,
a = \(\frac{d v}{d t}\)
∴a = \(\frac{d}{d t}\)(Aω cos ωt)
a = -ω2 A sin ωt 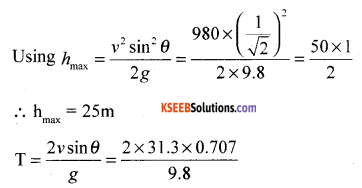 Question 34.
A stone of mass 0.25 kg tied to the end of a string is whirled round in a circle of radius 1.5 m with a speed of 40 rev./min in a horizontal plane. What is the tension in the string? W hat is the maximum speed with which the stone can be whirled around if the string can withstand a maximum tension of 200 N?
Answer: 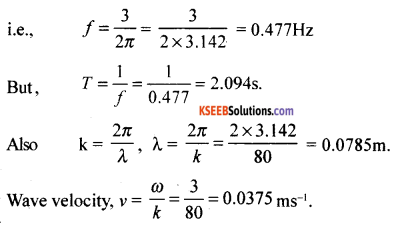