I. Answer the following questions in a word, a phrase or a sentence each:

Question 1.
Where does Babar Ali run classes for poor children?
Answer:
Babar Ali runs classes at his village in Murshidabad in West Bengal.

Question 2.
How is Babar Ali’s routine described by the writer?
Answer:
Babar Ali wakes up every morning at seven and starts his day by doing some household chores. Then he attends classes as a student of class XII. After school hours, he makes his way to an afternoon school where he is the headmaster which he runs for the underprivileged children from the surrounding villages, free of cost.

Question 3.
Give a picture of Babar Ali’s school.
Answer:
It is a dilapidated concrete structure, covered with half tom posters. Inside, in a tiny, dank room behind a desk Babar Ali sits and runs his school, where about 800 under privileged kids are taught free of cost. Behind the office is Babar’s home.

Question 4.
Why is Babar Ali called a fortunate soul in his village?
Answer:
Unlike most of the children in his village, Babar Ali has gone to school and got formal education. (His father is a jute seller and they have their own thatched house and space all around) His father even though he himself was a school dropout believes that education is man’s true religion and has supported Babar’s venture.

Question 6.
Why is sending children to school, a costly affair for parents?
Answer:
Because they have to pay for uniforms and books.

Question 10.
What is the strength of the students in Babar Ali’s school?
Answer:
800 students.

Question 11.
How does he become an inspiration to millions of youth?
Answer:
By helping hundreds of children to get educated.

Question 12.
What proverb does the story of Babar Ali underline?
Answer:
“Where there is a will there is a way”.

II. Answer the following questions in a paragraph each:

Question 1.
Why do you think Babar Ali took the initiative to start his own school?
Answer:
Though children are provided free education, sending children to school is not entirely free of cost. Although children are taught for free, they still have to pay for uniforms, books etc. Many families cannot send their children to school. Thus, instead of going to school, most of the boys help out their families by working in shops as day labourers, grass cutters etc. Girls work as maid servants in the village, where they cook, clean, wash clothes and dishes for their employers Babar wanted to change this. So he took the initiative of opening his very own school.

Question 2.
‘What started as a game resulted in a much sought after school for the underprivileged’. Explain.
Answer:
Babar Ali started his school at the age of nine. In fact his school “Anand Siksha Niketan” grew out of a game. Initially the children used to play with Babar as a teacher. His friends had never seen the inside of a school, so they enjoyed playing students.

They ended up learning arithmetic and enjoying it. In 2002, this game got institutionalized with a strength of eight. Word spread and the numbers grew’. Many friends of Ali and Non- Govemment Organisations, IAS officers and local cops donated rice for midday meals. At last Government took initiative to provide rice to the school. Now the school has 800 students in total, with 10 volunteer teachers teaching for classses one to eight. It is a godsent opportunity for the poor children of the neighbouring villages,

He is the inspiration for institutions and a lesson to learners. His good thought of changing the lives of the poor in society is what is needed for this country. Amidst all selfish people, he is one outstanding selfless person who proves the quote ‘nothing is impossible’.

He has proved that ‘man may be single but can achieve multiple goals’. His teaching for the underprivileged is an excellent thought which provides for a better education for all poor people to hope for a better tomorrow.

Inspired by these words, many have understood the value of education and its uses and have started sending their children to schools. Babar’s commitment in helping these people is undeniable and the fact that from eight students in the beginning how his school has grown to cater for eight hundred, shows how- he has changed the people around him and drawn the children to school. Babar is a shining example for the quote ‘where there is a will there is a way’.

Inspite of being only a teenager instead of whiling away his time playing in the fields, he had a vision and followed it and motivated others into following him. This literacy movement should not stop at this, but should spread to other places also, igniting other like minded souls to take the initiative to dream, work for and realise a better tomorrow for India. Babar Ah has become a legend in his youth only and stands tall as a youth icon for the world to emulate.

Question 2.
The increasing strength of Babar Ali’s school reflects the transformation in our society’s attitude towards education. Substantiate.
Answer:
Babar Ali’s school was started when he was only nine, while playing a game. Very soon, children began to love his way of teaching and flocked to his ‘school’. Babar did not charge any fee for his teaching. He also got the help of the local educated people, who came and taught the children, Babar was successful in getting the help of nine high school student volunteers.

The oldest and most educated of them is Debarita who goes to College in Behrampur. Babar himself studies in class XII in a school quite far from his house. He commutes the long distance, attends classes in the mornings and comes back in the afternoons to his ‘school’ to teach youngsters who have worked hard in the mornings and are now ready for learning.

The fact that his school is entirely free, he and his staff teach well, there is a midday meal, and his school is recognized by the West Bengal Government, attracts many students to his school. The increasing strength of his school just shows how7 eager people are to get their children educated, and how7 good, selfless work gets noticed by people soon.

Those who cannot afford education in the regular schools, do not mind sending their children to learn from teachers like Babar. This only proves that Indians are realizing the significance of education in life.

Question 3.
Do you feel that Babar Ali’s initiation is a success story? Explain.
Answer:
The initiation is a definite success. Babar Ali’s intention when he started his school was to help the less fortunate people by providing free education. Today, more and more under privileged people have utilized this opportunity of his and are coming up in society.

Moreover we can clearly see that Babar Ali’s action has inspired millions of people around the world – If more people take part to change the world for the better, there will be a greater success than he would have wished for Babar Ali has brought about the change he wanted to see in his surroundings.

If a young boy from a village-had the will and determinations to make a change in the world out there, it is not right on own part to remain as mute spectators but we must also actively participate towards bringing the change.

Homophones
Homophones are words with similar sound but different spelling and meaning. Consult a dictionary to know their meaning and use them in your own sentences.
e.g.
1 . cite, sight, site
2. bored, board
3. steel, steal
4. hair, hare
5. weather, whether
6. some, sum
7. right, write
Answer:
1. cite, sight, site
cite – The teacher cites many instances to make the students understand a particular topic.
sight – I sighted a rabbit amidst the bushes.
site – My father is planning to build a huge building in his big site.

2. Bored, Board
Bored – I was bored to watch the movie.
Board – The teacher writes on the black board.

3. Steel, steal
Steel – Steel is a strong metal.
Steal – One should not steal other’s ideas.

‘5. Weather, whether
Weather – The weather was very pleasant yesterday.
Whether – I don’t know whether I can climb the hill.

6. Some, sum
Some – Some people are sitting in the park.
Sum – Einstein helped a little school girl to solve the sum.

7. Right, write
Right – All the living creatures have their right on this earth.
Write – I write a letter.
Right – Kamal’s answer was right.

Homonyms
Homonyms are words with the same sound and spelling, but with a different meanings. 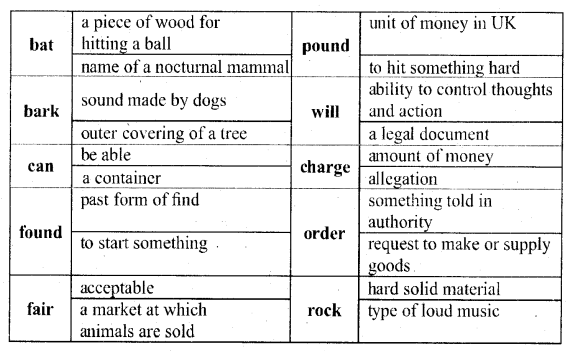 Use the above words in your own sentences so as to get both the meanings. One is done for you.
1. The dogs bark all night.
2. The barks of some trees are very thick.