Question 1
What is the function of ALU?
Answer:
ALU unit performs all the arithmetic calculations and logical operations involved in a program.

Question 2.
What are ergonomic keyboards?
Answer:
It is a special type of keyboard that allows typing without much strain and bending at the wrists. It reduces muscle and finger pain while typing.

Question 5.
What is meant by stream extraction?
Answer:
cin is used in conjuction with >> operator, known as extraction or get from operator.

Question 8.
What is meant by calling a function?
Answer:
To use a function, user will have to call or invoke that function. It helps to execute the function and perform the process of a function.

Question 9.
Define formatting in wordprocessor.
Answer:
Formatting is the process of changing the attribute of a text document.

Question 10.
What is a value c Ml in spreadsheet?
Answer:
A cell that contains numbers with or without a + or – symbol is called a value cell.

Question 14.
What is testing and debugging?
Answer:

Question 15.
Write one advantage and one disadvantage of OOP.
Answer:
Advantage:
The object-oriented programming provides improved software development productivity over traditional procedure based programming techniques, because of the factors like modularity, extensibility and reusability.

Question 16.
What are linear and non-linear data structures?
Answer:

Question 18.
Write the structure definition to store name of the student, register number, class and Show how is the structure initialized? Give an example.

Question 19.
What is OMR and where is it used?
Answer:
Optical Mark Reader: It is an input device that can detect marks made in predetermined positions on a pre-printed paper called OMR sheet. An optical mark reader shines a light beam onto the input document and is able to detect the marks because less light is reflected back from them, than from the unmarked area. It is used in grading test papers.

2. Selective construct:
It is the process of selecting certain set of statements based on a requirement for execution.

3. Iterative construct:
It is the process of the execution of certain set of statements repeatedly until a requirement is satisfied.

Question 23.
Define character set, integer constant, and floating-point constants.
Answer:
Character set is a set of symbols that a programming language identifies and uses in writing data and instructions in a programming language. Integer constants are whole numbers without any fractional part. Floating-point constants are numeric values that contain a decimal point and can contain exponents also.

Question 24.
Explain manipulators.
Answer:
1. A manipulator in C++ is used to control the formatting of output and/or input values.

2. Manipulators can only be present in Input/Output statements. The ‘end!’ manipulator causes a newline character to be output.

Question 25.
How can we input the values into a one-dimensional array?
Answer:

Question 27.
Briefly explain the characteristics of a computer.
Answer:
1. Speed:
Computers are fast in doing calculations. The speed of the computer is measured in terms of millions of instructions per second (MIPS).

2. Storage Capacity:
Computers come with a large amount of memory. They can hold lot an of data. Computers can select and display a particular piece of information from a very large amount of data within a short time.

3. Diligence:
After doing work for some time, humans become tired but computers do not become tired. They work continuously. In fact, some computers which control telephone exchanges are never shut down. This is called diligence.

4. Accuracy:
The results that the computers produce are accurate provided data and programs are reliable.

4. This addition has caused an overflow bit. Whenever there is an overflow bit in 1 ’s complement, this bit is added to the sum to get the correct answer. This gives the final answer as 001002 (or 410).

2. The operator which takes two operands to perform some operation is called a binary operator.

3. The operators which perform operation of relation between two operands are called relational operators.

4. The operators which perform combine or negate the expressions that contain relational operators are called logical operators. 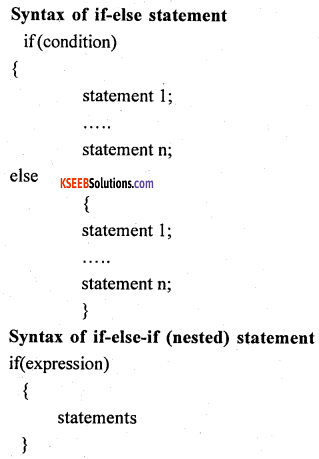 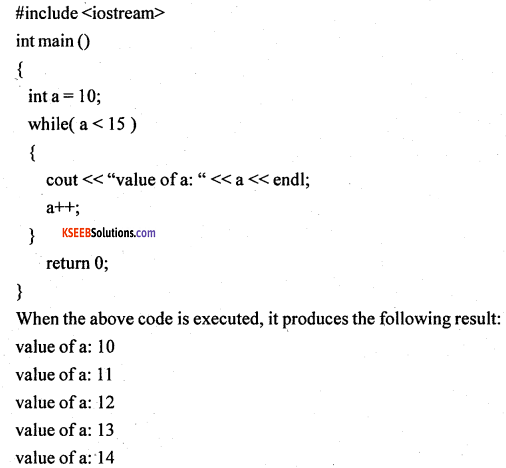 Question 33.
Write a program to count the number of vowels and consonants in a string.
Answer: 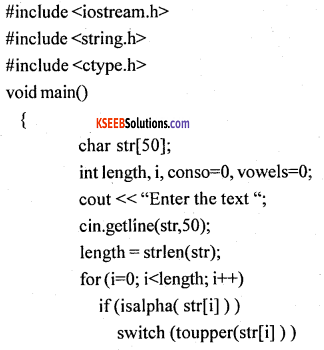 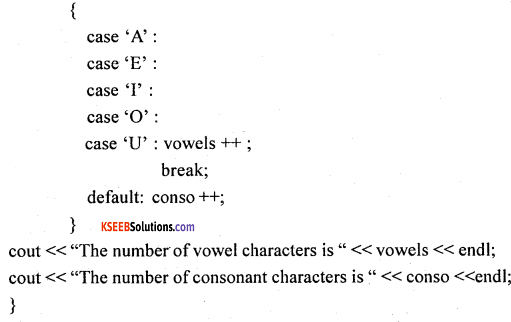 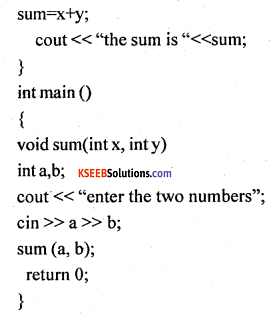 In the above example, sum() is a user defined function. main() is a calling function which gives a function call sum (a, b) with actual arguments a, b. The copy of values of a and b are sent to formal arguments x and y in the called function sum(). The function sum() performs addition and gives the result on the screen. Here it can be observed that no value is sent back to the calling function main(). These kinds of functions are called “Function with argument but no return values”.

Answer:
1. workbook:
A workbook is a set of electronic spreadsheets.

2. cell:
The intersection of a row and a column in a spreadsheet is called a cell.

3. cell address:
A cell address is a unique ID given to a cell, represented by column name and row name.

4. active cell:
The cell that is currently open and ready for editing is called the active cell.

5. cell pointer:
Cell pointer is a rectangular box that appears in the worksheet and is used to make an entry in a cell.

1. Chat:
It is an online communication between two users through computer on internet. Once a chat has been initiated, either user can enter text by typing on the keyboard and the entered text will appear on the other user’s monitor. Most networks and online services offer a chat facility.

2. Bulletin Board:
It is an electronic message center where people can post public messages. Messages can be placed on the computer so people can leave them for other people to read and see and later erase them when not required. For example, it is used to advertise things to buy or sell, announce events, or provide information.

3. FTP:
It is a standard network protocol used to exchange and manipulate files over a TCP/IP based network, such as the Internet. FTP is most commonly used to download a file from a server using the Internet or to upload a file to a server.

4. Telnet:
Telnet stands for ‘telecommunications network’, and was built to be a form of remote control to manage mainframe computers from distant terminals. Telnet is a text-only protocol and the user cannot see graphics or fancy images while working with Telnet, nor will they be able to transfer files with Telnet. Telnet is used to communicate with other computers and machines in a text-based manner.