Question 1.
What is the S.I. unit of Electric Current?
Answer:
ampere (or) A.

Question 2.
State Dalton’s law of Partial Pressure.
Answer:
“The total pressure exerted by a mixture of non-reacting gases is equal to the sum of the partial pressures of all the component gases at constant temperature.”

Question 7.
Give the chemical formula of Borax.
Answer:
Na2B4O7 10H2O.

Question 10.
Name the organic product obtained when Benzene is treated with excess of chlorine in presence of anhydrous Aluminium chloride.
Answer:
Chlorobenzene.

Question 11.
A solution is prepared by adding 2g of a substance A to 18 g of water. Calculate the mass percent of the solute.
Answer:

Question 15.
Diamond is covalent, yet it has high melting point. Why?
Answer:
Due to strong covalent bonds holding all the carbon atoms in diamond together.

Question 16.
How do you prepare Benzene from Ethyne.
Answer:
When ethyne is passed through a red hot copper tube, it polymerises to form benzene.

Question 17.
Explain the Friedel crafts alkylation of Benzene with the equation.
Answer:
When Benzene is treated with an alkylhaiide in presence of anhydrous Aluminium Chloride, alkylation takes place to give alkyl benzene.

(b) Which of the following will have most negative electron gain enthalpy?
P, S, Cl, F
Answer:
F.

Question 21.
(a) Write any two differences between sigma-bond and Pi-bond.
(b) Name the type of Hydrogen bonding in ortho-nitrophenol.
Answer:
(a)
σ bond : 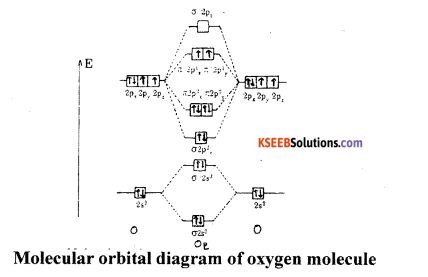 Question 24.
(a) How temporary Hardness of water is removed by Boiling?
Answer:
Hard water can be softened by the following methods depending upon the nature of hardness. Temporary hardness: (i) By boiling: It can be removed by merely boiling the water. Boiling decomposes the bicarbonates to give carbon dioxide and insoluble carbonates, which can be removed by filtration.

(b) What is the composition of water gas?
Answer:
CO + H2

Question 25.
(a) Complete the following reactions.

(b) Write the dimeric structure of Aluminium chloride.
Answer:

(c) Define catenation.
Answer:
Carbon atoms have a remarkable property of joining with one another in a large number to form a long chain and rings. This property is known as catenation or self linkage.

Question 27.
(a) Calculate the amount of carbon dioxide produced by the combustion of 24g of methane.
Answer:

(b) Define Mole. What is the value of Avagadro’s Number.
Answer:
Mass of a substance which contains avogadro number of particles.
Avogadro number = 6.023 x 1023

(b) Give any two postulates of Bohr’s theory of Atomic model.
Answer:
Bohr’s model of an atom, the postulates are:

Question 30.
(a) Write any three postulates of Kinetic theory of gases.
Answer:

(b) What is the change in the value of entropy when ice melts to give water.
Answer:
+ve (or) positive.

Question 32.
(a) State Hess’s law of constant heat summation. Illustrate with examples.
Answer:
Hess’s law : Whether a chemical reaction takes place in a single step or in several steps, the ‘ total change in enthalpy remains the same.
Consider the formation of CO2 from C.

(c) Write the relationship between the solubility and solubility product of AB type salt.
Answer:
KSp = S2 (or) S = √KSp

Procedure : Pure and dry oxygen is passed through the entire assembly of the apparatus (Figure) till the CO2 and moisture is completely removed.

A boat containing weighed organic substances is introduced inside from one end of the combustion tube by opening it for a while. The tube is now strongly heated till the whole of the organic compound is burnt up. The flow of oxygen is continued to drive CO2 and water vapours completely to the U-tubes. The apparatus is cooled and the U-tubes are weighed separately.

(b) What are nucleophiles? Give one example.
Ansert:
The molecules or negatively charged ions w hich are capable of donating an electron pair to • electron deficient centre of the substrate are called nucleophiles.