Question 1.
Write the IUPAC name of

Question 4.
What is meant by octet rule?
Answer:
It is the tendency of atom to attain 8 electrons in valence shell.

Question 5.
Name the process in which hydrogen is obtained as a by product?
Answer:
Electrolysis of brine solution.

Question 6.
Which alkali metal is the strongest reducing agent?
Answer:
Lithium or Li.

Question 9.
State Boyle’s law.
Answer:
At constant temperature the volume of a given mass of a gas is inversely proportional to the pressure.

Question 11.
What is effect of catalyst on the equilibrium of a reversible reaction.
Answer:
A catalyst has no effect on the position of equilibrium but it helps the reaction to attain equilibrium quickly.

Question 13.
State Markownikoff’s rule.
Answer:
When an asymmetric reagent adds up to an unsymmetrical alkene, the negative part of the adding molecule goes to the carbon atom with lesser number of hydrogen atoms while the positive part to the other carbon atom.

Question 14.
What is electron gain enthalpy?
Answer:
The enthalpy change occurs when an electron is added to isolated gaseous atom to convert into anion.

Question 18.
What mass of calcium carbonate is to be decomposed to obtain 4.4 g of CO2 in the following reaction.

Question 19.
State and illustrate Pauli’s exclusion principle.
Answer:
No two electrons in an atom can have all same set of four quantum numbers alike.

Question 21.
What type of system, the following systems are
i) a cup containing hot tea
ii) hot coffee placed in a thermos flask?
Answer:
i) open system
ii) isolated system.

Question 22.
State Le Chatelier’s principle.
Answer:
If a system under equilibrium be subjected to a change in temperature, pressure or concentratio, then the equilibrium shifts itself in such a way so as to neutralise the effect of the change.

Question 23.
Chemical equation is dynamic. Give reason.
Answer:
Both forward and backward reactions are occuring at the same rate.
The concentration of the reactants and products remains constant.

Question 24.
What is resonance effect? Name one group each showing + R and – R effect.
Answer:
The resonance effect is defined as the polarity produced in the molecule by the interaction of two π bonds or between a π -bond and lone pair of electrons present in conjugated molecular.
+Reffect : -NH2, – NHCOCH3, – CH3
-Reffect : -NO2, -CN, -CH0, -COOH

Question 25.
Define chain and functional isomerism. Give examples for each isomerism.
Answer:
Compounds having same molecular formula but differing in arrangement of atoms in chain is called isomerism.
Ex – Butane C4H10

Question 26.
(a) Explain the mechanism of nitration of benzene?
Answer:
Nitration benzene reacts with a mixture of concentrated nitric acid and concentrated sulphuric acid at 50°C to form nitrobenzene.

Step 2 : The electrophile NO2+ attacks the benzene ring to form a carbocation which is resonance stabilized.

Step 3 : Loss of a proton to give nitrobenzene. The proton is removed by HSO4–

(b) Draw the structure of trans 1, 2- dibromo ethene.
Answer:

Question 28.
(a) Define geometrical isomerism. Give an example.
Answer:

(b) Name the product when calcium carbonte is treated with water.
Answer:
Acetylene.

Question 29.
What is pollutant? Mention the three gaseous air pollutants.
Answer:
Chemicals which bring about undesirable changes in the environment are called pollutants.
Ex : Nitric oxide (NO), Nitrogen dioxide (NO2), sulphur dioxide (SO2)

Question 30.
(a) Define ionisation enthalphy. How does it vary along the period and down the group in the periodic table.
Answer:
The minimum amount of energy which is needed to remove the most loosely bounded electron from a neutral isolated gaseous atom in its ground state to form a cation also in a gaseous state.

Ionisation energy increases along the period because the atomic size decreases from left to right in a period. Hence effective nuclear charge increases and removal of electrons becomes more and more difficult.

(b) How many periods are there in the periodic table?
Answer:
7 – periods.

Question 31.
(a) Draw the energy level diagram of O2 molecule and calculate the bond order, why O2 is paramagnetic?
Answer: 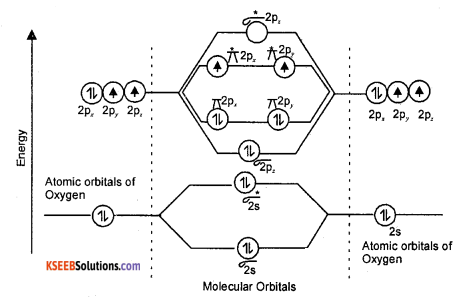 (b) Give two differences between bonding and antibonding molecular orbitals.
Answer:

(b) According to VSEPR theory, predict the shape of H2O and NH3 molecules.
Answer:
H2O – bent V shaped.
NH3 – pyramidal.

(b) Mention biological role of Na and Ca ions.
Answer:
Na – are involved in transmission of nerve signals.
Ca – 99% of body calcium is present in bones and teeth.

Question 36.
(a) Name the compound of group – 13 element which exist as dimer and draw the structure of the compound.
Answer:
AlCl3 Structure

Question 37.
(a) carbohydrate containing 40% carbon, 6.73% hydrogen and 53.3% oxygen. The molecular mass of compound is 180. Determine its molecular formula.
Answer:

(b) Define empirical formula.
Answer:
It is the simplest formula of compound which gives the relative number of atoms of different elements present in a molecule of a compound.

(b) Mention the shape of d-orbitals.
Answer:
double dumbell shaped.

(b) What happens to the entropy, when liquid is converted into vapours?
Answer:
Entropy increases.