Question 1.
Define metabolism.
Answer:
It is the sum total of all molecular interactions that occur inside living organisms.

Question 2.
Which cell can fix atmospheric nitrogen in some of the cyanobacteria?
Answer:
Heterocyst.

Question 3.
What is venation?
Answer:
Arrangement of veins and veinlets on the lamina of a leaf.

Question 4.
Mitochondria are called Tower houses* of the cell. Why?
Answer:
They produce ATP.

Question 5.
Name the phase of the cell cycle which involves DNA replication.
Answer:
S-phase of interphase.

Question 6.
What is guttation?
Answer:
The loss of water ¡n liquid form through specialized structures called water stomata or hydathodes is called guttation.

Question 7.
Mention the technique of growing plants in a nutrient solution.
Answer:
Hydroponics.

Question 9.
What is tetany?
Answer:
It refers to the continued state of contraction or wild contractions of muscles due to low Ca in body fluids.

Question 10.
Define hormones.
Answer:
Hormone: Hormones are biochemical messengers secreted in minute quantities at a place and are transported to a target cell to induce a specific change in the target cell. Hormones have many functions.

Question 11.
List any two differences between chordates and non-chordates.
Answer:

Question 12.
What are tendons and ligaments?
Answer:
Tendons: They are exclusively composed of white collagenous fibres arranged in regular bundles. In between these fibres, a few fibroblasts may occur. Usually, they connect muscle to bone.

Ligaments: They may contain both white and yellow fibres and these fibres are arranged in less orderly patterns. Usually, they connect bone to bone.

Question 13.
Why the Golgi apparatus remains in close association with the endoplasmic reticulum?
Answer:

Question 16.
Mention two types of circulatory systems.
Answer:
Pulmonary circulation:
It includes the collection of deoxygenated blood into the right chambers of the heart and then pumping the same to the lungs for oxygenation, and bringing back the oxygenated blood from the lungs into the left atrium.

The oxygenated blood leaves the lungs through pulmonary veins which open into the left atrium.

Systemic circulation:
It includes the collection of oxygenated blood into the left chambers of the heart, and the distribution of the same to various tissues through the aorta, and its branches.

Aorta gives off various branches in different directions for distribution. The blood exchanges oxygen, and carbon dioxide in the tissues of the body. Thus the blood is again deoxygenated. This deoxygenated blood is collected by superior and inferior vena cava and sent into the right atrium.

Question 17.
Write antigens on RBC’s and antibodies in the plasma of the universal donor blood group and universal recipient blood group.
Answer:

Question 18.
Bile juice contains no digestive enzymes. Then how does it helps for digestion?
Answer:
Bile juice is secreted by the hepatic cells of the liver and stored in the gall bladder. It is released into the duodenum through the bile duct. Bile juice doesn’t contain any digestive enzymes. But it contains the digestive components ¡n the form of bile salts Sodium Glycocholate, and Sodium taurocholate, Bile salts emulsify the fats by lowering their surface tension and convert them into numerous tiny droplets. Bile is rich ¡n sodium bicarbonate; hence it neutralizes the acidic chyme. It also helps in the absorption of fat-soluble vitamin K.

Question 19.
What is Binomial nomenclature? Write any two universal rules of nomenclature.
Answer:
Binomial Nomenclature:
This method was introduced by Carolus Linnaeus.
In this method, every organism is given a scientific name, which has two parts, the first is the name of the genus (generic name) and the second is the name of the species (specific epithet).
e.g. Mangifera indica for mangoes and Homo sapiens for human beings. In the above,

Man gera and Homo are generic names, while India and sapiens are the names of the species belonging to Man gilera and Homo respectively.

Question 21.
Write about the significances of meiosis.
Answer:
Significance of Meiosis:

Question 22.
How is mycorrhizal association helpful in the absorption of water and minerals in plants?
Answer:
The hyphae have a large surface area from an Ammonotebic large volume of soil.

Question 26.
Classify the animals based on nitrogenous wastes excreted by them.
Answer:
Ureotetic (Urecotelic).

(2) Gametophytic phase of the life cycle is represented by a multicellular, haploid thallus, which is called gametophyte.

(4) Gametophyte is autotrophic and independent in nature.

(5) The gametophyte produces sex organs, the antheridia and the archegonia which are multicellular Antheridia may be embedded within the thallus or may be specifically located at the tips of the gametophyte. It produces biciliate curved antherozoids.

Archegonia is a flask like structure. It bears a basal bulbous vendor and a narrow, hallow structure at it is summit called the neck. Within the venter, the female gamete or egg ¡s situated along with a venter canal cell. The neck shows neck cells, neck canal cells and cover cells.

(6) Fertilisation takes place in the presence of water, leading to the formation of a zygote which later develops into a multicellular embryo. Hence, the group is treated under embryophytes.

(7) Sexual reproduction is always of the Ougamous type.

(8) Embryo develops into a diploid sporophyte consisting of the foot, seta and capsule, which is dependent on the gametophyte.

(9) Diploid sporophyte reproduced by the formation of haploid spores (meiosis occur during spore formation). The spore germinates and produces gametophytes.

(10) In their life cycle, such distinct heteromorphic alternation of generations is shown by the members.

Question 28.
(a) Describe three types of simple epithelial tissues based on structural modification of the cells.
Answer:
Epithelial tissue ¡s a tissue, which lies on the upper and outer layer covering the surface of the organ or lining the cavity.

Squamous epithelium:
a. It occurs in the skin of vertebrates. Alveoli of lungs, the mouth cavity, etc.
b. The cells are nearly hexagonal flat and plate-like.
c. A spherical or oval nucleus is found to be present at the cell centre.
d. The cells are closely fitted with minimum intercellular space. Hence they look like mosaic pavement. Because of this, the squamous epithelium is also called pavement epithelium.
e. It forms a continuous cover and protects the inner tissues.

Columnar epithelium:
a. it occurs in the mucosa membrane of the stomach and the intestine.
b. The cells are elongated and pillar-like. The lower ends are narrow and the upper ends are broad.
c. The nucleus is oval and the basal cytoplasm is granular.
d. Cells are lodged over a basement membrane. Intercellular spaces are present at the basal region of the cells.
e. The columnar cells are absorptive and protective in function.

(b) Write any two functions of bones.
Answer:
Structure support. 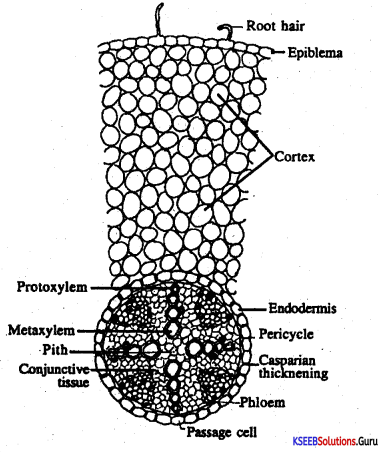 Question 30.
Explain any five classes of enzymes based on the type of reactions they catalyse.
Answer:

Question 31.
Mention any one importance of the following macronutrients.
(a) Nitrogen (b) Phosphorus (c) Potassium
Answer:
Macronutrients: They are essential elements that occur in a concentration of 1-10 mg/g of dry matter, e.g., C, H, O, N, P, K.

Micronutrients: They are essential elements that occur in plants in a concentration of 0.1 mg or below per gin of dry matter, e,g,, Mn, Zn, Cu, Mo, Bo.

Beneficial Nutrients: They are non-essential elements that have some specific role in some plants, e.g., Na4 in Ç pLants, Si in grasses.

Toxic Elements: They are non-essential elements which if absorbed reduce plant growth, and yield. Many elements become toxic only after their concentration reaches a particular level, e.g., Lead, Aluminium, Mn.

Essential Elements: They are those elements that are involved in some vital structural, and functional role in plants so that their deficiency will cause disorders while their absence results in non-completion of the life cycle, e.g., C, l-I, O, N, P, K Ca, Mg, S, etc. 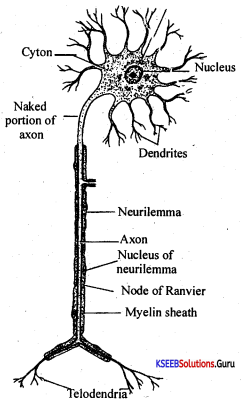 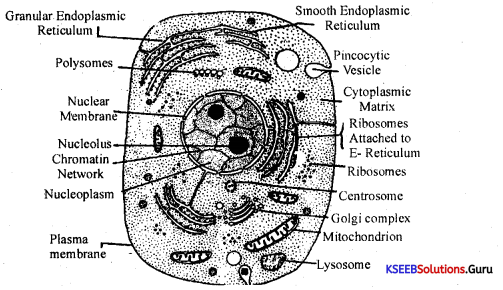 Question 36.
Give the schematic representation of Glycolysis.
Answer: 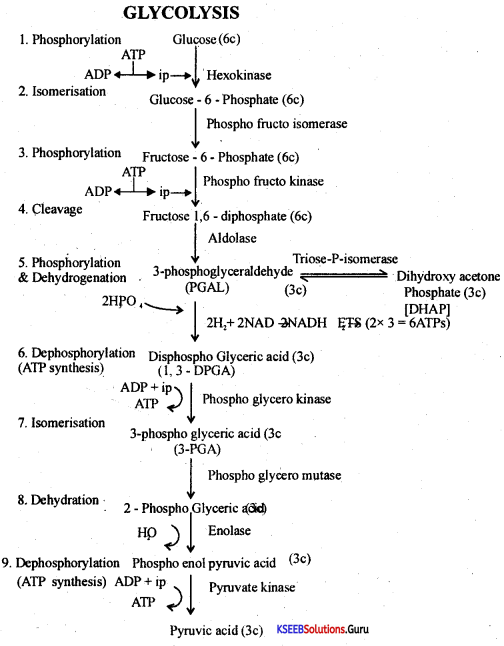 Question 37.
Name any five hormones secreted by the pituitary gland and mention anyone function of each.
Answer:
1. The pituitary gland weighs about 0.5 gm and is a pea-sized endocrine gland that lies on the ventral surface of the brain attached to the hypothalamus by a nervous stalk called the infundibulum.

3. Based on origin, it is divided into two parts namely Adenohypophysis and Neurohypophysis.