Question 1.
What is biodiversity?
Answer:
Biodiversity refers to the variety of organisms present on the Earth (species richness).,

Question 2.
Where do you find pneumatophores?
Answer:
In mangrove species.

Question 4.
Where do you find motor cells?
Answer:
In monocot leaf

Question 5.
In which stage of the cell cycle does DNA replication occur?
Answer:
S-phase of interphase.

Question 6.
Define imbibition.
Answer:
Imbibition is a special kind of diffusion that involves the movement of water molecules along a diffusion gradient from a region of higher concentration onto a suitable solid matrix (adsorption).
or
It is the adsorption of water molecules by hydrophilic colloids.

Question 10.
Define reflex action.
Answer:
Reflex action is an automatic response to any kind of stimulus without conscious involvement of the brain.

Question 11.
What is binomial nomenclature? Who proposed it?
Answer:
Naming of living organisms by scientific name universally by two names is binominal nomenclature. The two names include generic name and species name. It was Proposed by Carolus Linnaeus.

Question 12.
Name the fungal and algal components of lichens.
Answer:
Chemosynthetic bacteria are autotrophic as they can manufacture organic food from inorganic raw materials, with the help of chemical energy obtained by them by oxidising inorganic chemicals present in their environment.

Question 14.
Earthworms are called “Farmer’s friends.” Justify it.
Answer:
Earthworms are called friends of farmers because they make burrows in the soil and make it porous which helps in respiration and penetration of developing plant roots. The fertility of soil is also increased by their vermicompost.

Question 15.
Differentiate tendons from Ligaments.
Answer:
1. Tendons: They are exclusively composed of white collagenous fibres arranged in regular bundles. In between these fibres, a few fibroblasts may occur. Usually, they connect muscle to bone.

2. Ligaments: They may contain both white and yellow fibres and these fibres are arranged in less orderly patterns. Usually, they connect bone to bone.

Question 16.
Name the two types of lymphocytes responsible for immunity.
Answer:
T and ‘B’ lymphocytes.

Question 18.
What is osteoporosis? What is the cause for it?
Answer:

Question 20.
What is placentation? Mention any two types.
Answer:
The arrangement of ovules within the ovary on a fertile tissue.
Marginal, Axile, Parietal, Basal, Central, Free central.

Question 21.
Write any three differences between prokaryotes and eukaryotes.
Answer:

Question 23.
Explain the carbohydrate digestion in the small intestine.
Answer:
a. Digestion in the mouth: The salivary amylase or ptyalin converts starch and glycogen into maltose units.

b. Digestion in the intestine:
Pancreatic juice: Carbohydrase secreted by the pancreas is called pancreatic amylase. It converts starch and glycogen into maltose units.

Question 24.
Define the following:
(a) Tidal volume
(b) Residual volume
(c) Vital capacity
Answer:
(a) Tidal volume: It is the volume of air inhaled or exhaled with each inhalation and exhalation without any extra effort. Its volume is 500 ml.
(b) Residual volume: It is the volume of air that remains inside the lungs at the end of forceful expiration. Its volume is 1100 – 1200 ml.
(c) Vital capacity: It is. the total volume of air that can be expelled from the lungs during maximum exhalation.
VC = TV+ IRV + ERV
= 500 + 2500 + 1100
= 4100 ml approx.

Question 25.
What are uricotelic animals? Give two examples.
Answer:
Ureotelic animals: Animals that excrete urea are called ureotelic animals. Urea is produced by the liver during the ornithine cycle. Urea is stored in the urinary bladder in a dissolved state called urine.
e.g: Cartilaginous fish (Shark), Mammals and Amphibians.

Question 27.
Write the salient features of kingdom Mycota with two examples.
Answer:
Kingdom -Fungi (Mycota):
Fungi are eukaryotic, achlorophyllous organisms that are but, generally multicellular a few are unicellular (yeast). 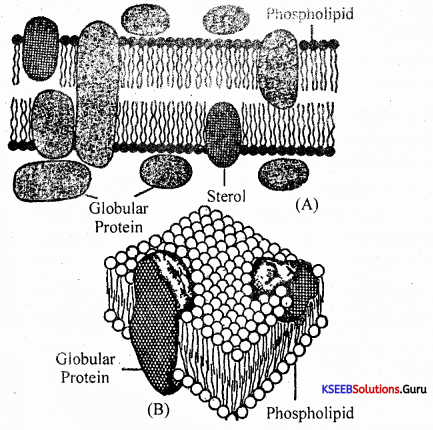 All living cells are enclosed in a thin, living and selectively permeable membrane called the plasma membrane. Its thickness is about 75 – 100 A Plasma membrane consists of 30 – 40% lipids and 60 – 70% proteins. In animal cells, it surrounds the protoplasm and in plant cells, it is next to the cell wall.

Fluid mosaic Model By Singer & Nicholson:
(a) According to this model, the plasma membrane consists of a double layer of lipid molecules and globular protein molecules and sterols distributed at random. In comparative terms, it can be said that the plasma membrane is formed of ‘protein icebergs in the sea of lipids’.
(b) The protein molecules are globular proteins and these proteins penetrate or lie at the periphery to form a mosaic pattern.
(c) Heads of the phospholipid molecules of the two layers are directed in the opposite directions while tails of the two layers face each other.
(d) In animal cells glycolipids and cholesterol are also present along with proteins.

Question 30.
Describe any five classes of enzymes and the type of reaction they catalyse.
Answer:
Classification of enzymes: 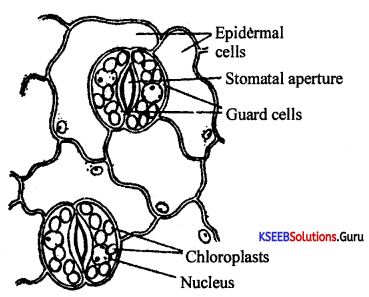 Dicot stomatal apparatus includes,
(a) Stoma: a minute opening present between the guard cells.
(b) Guard cells: Specialised epidermal cells surrounding the stoma. These are two in number and are kidney-shaped. Their outer walls are thin and elastic but inner walls are thick and less elastic.

Question 32.
Explain the process involved in root nodule formation.
Answer:
1.When the root hair of a leguminous plant comes in contact with Rhizobium, it becomes curled or deformed due to the chemicals secreted by the bacterium.

2.The rhizobia enter these deformed root hair and proliferate within the root hair. 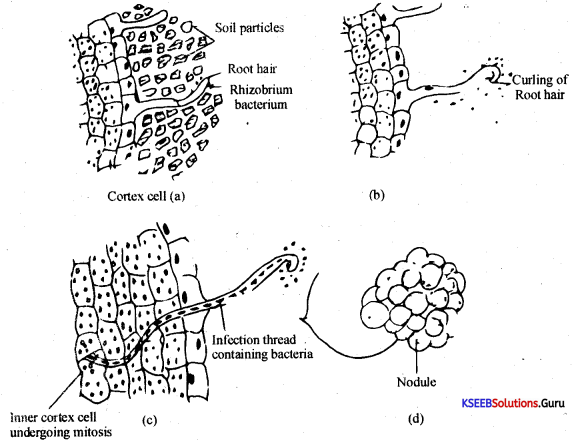 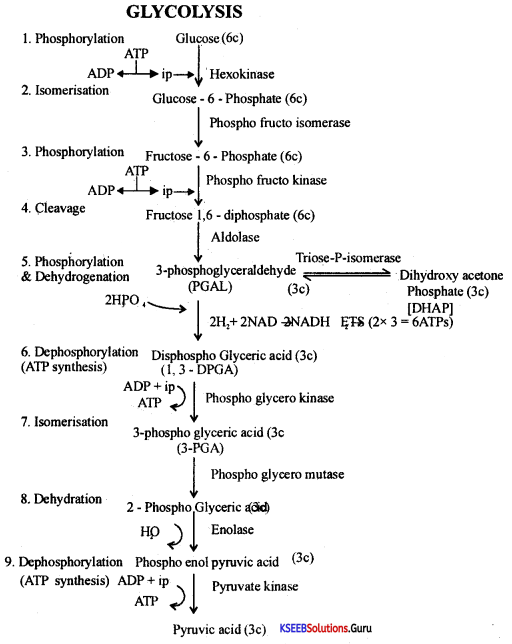 Question 34.
(a) Write any two differences between a long day and short-day plant,
Answer:

(b) Mention the role of Auxins in plants,
Answer:
Auxins

Question 35.
Draw a labelled diagram of the sagittal section of the human brain.
Answer: 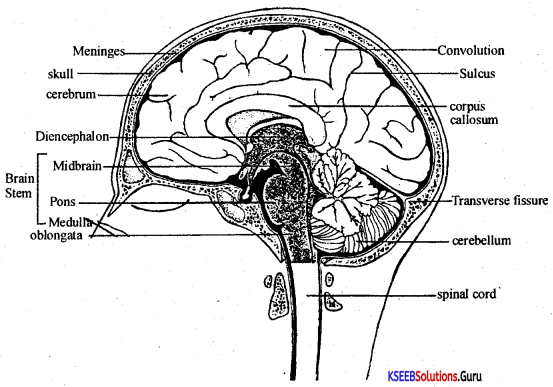 Question 36.
Write the schematic representation of hormonal action.
Answer:
Mechanism of hormone action: Hormones exert their effects on target cells by interacting with specific receptors of these cells. These receptors are proteins or lipoproteins. The location of the hormone receptor depends on the chemical nature of the hormone. The water-soluble hormones (polypeptides, glycoproteins and catecholamines) cannot pass through the plasma membrane, hence their receptors are located on the outer surface of the membrane.

Water-soluble hormone action: The lipophilic hormones (steroids and thyroxine) can pass through the plasma membrane and enter into their target cells, hence the receptors for these hormones are located within the nucleus and cytoplasm.

Mechanism of action of a steroid hormone The lipophilic steroid hormones and thyroid hormones pass through the plasma membrane and get bound to a specific intracellular receptor. These receptors are commonly located within the nucleus. Once these nuclear hormone receptors are activated by their binding to the specific hormones, they alter the gene expression. They may switch on or off specific genes on the nuclear DNA. The transcription of DNA occurs and the newly formed mRNA directs the synthesis of specific enzyme proteins. These enzymes alter the metabolism of the cell in the required direction as per the intended action of the hormone.

2. CO2: Used as a raw material in photosynthesis. Its concentration in air is 0.03%. Its increase up to 0.5% increases the rate of the process but above 0.5% inhibits photosynthesis.

3. O2: Liberated as a by-product in photosynthesis. Its increase above the normal 21% in air, decreases the rate of the process. It is called the Warburg effect.

4. Temperature: It affects photosynthesis through its influence on the enzyme controlled dark reaction. The optimum temperature is 18 – 40°C for photosynthesis.