Question 1.
What is a taxon?
Answer:
A taxon is a unit of classification.

Question 6.
During which stage does synapsis occur?
Answer:
Zygotene.

Question 7.
What are porins?
Answer:
Porins are proteins that form huge pores in the outer membranes of plastids, mitochondria and some bacteria allowing molecules up to the size of small proteins to pass through.

Question 8.
Name the enzyme which helps in nitrogen reduction in prokaryotes.
Answer:
Nitrogenase.

Question 10.
What is serum?
Answer:
Plasma without cloning factors is known as serum.

Question 11.
Mention any two major groups of protozoans with an example for each.
Answer:

Question 13.
What is phyllotaxy? Name any two types.
Answer:
Patterns of arrangement of leaves on the stem or branch are known as phyllotaxy.
Types of phyllotaxy include – alternate, opposite and whorled.

Question 14.
What are nephridia? Mention their types.
Answer:
Nephridia are excretory organs in earthworms. Types are septal, integumentary and pharyngeal

Question 15.
Draw a neat labelled diagram of a mitochondrion.
Answer:

Section through mitochondrion (diagrammatic)
The elementary particles have been shown only on one crista.

Question 17.
What are joints? Name any two types of joints in man.
Answer:
Joints are points of contact between bones or between bones and cartilages.
Types:

Question 18.
What is (a) tetany (b) arthritis?
Answer:
(a) Rapid spasms in muscles due to low Ca+2 in body fluids.
(b) Arthritis: inflammation of joints.

Question 19.
Briefly explain any three types of taxonomical aids.
Answer:
All those collections of actual live specimens or preserved specimens, which help in the identification or verification of a species, are called taxonomic aids.
Some of them include,

1. Herbarium:
A herbarium is defined as a collection of plants, that have been dried, pressed and preserved on sheets.
These sheets are arranged in accordance with any accepted system of classification. They can be used for future references.

2. Botanical Gardens:
These are collections of living plants maintained for reference, i.e., they are meant for identification and classification. Both local and exotic plants are grown. 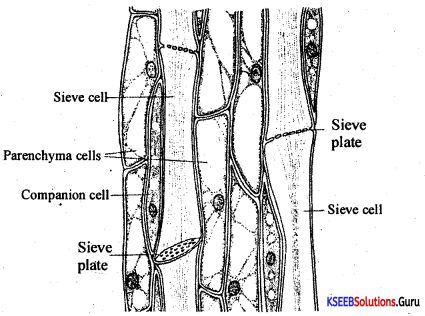 Based on their photoperiodic responses, plants are classified into the following groups:

Maltase :
It converts maltose into glucose and glucose.

Lactase:
It converts Lactose into Glucose and Galactose.

Question 24.
Briefly describe the transport of CO2 in the blood.
Answer:
CO2 is produced within the body cell as a metabolic waste product of oxidative metabolism.
CO2 is transported from cells to the alveoli through the following forms.
1. In the form of carbonic acid (7%).
2. In the form of carbamino haemoglobin (23%).
3. In the form of bicarbonates of Sodium and Potassium (70%).

Question 25.
Write a note on any three disorders of the circulatory system.
Answer:
(a) High blood pressure (Hypertension): B.P that is higher than the normal value of 120/80 mm Hg is known as hypertension.
(b) Coronary Artery Disease (CAD): Lumen of blood vessels become narrow due to deposition of calcium, fat, cholesterol etc. affecting the blood supply to the heart.
(c) Angina: symptoms of acute pain when enough O2 is not reaching the heart muscle.

Question 27.
List any four important characters of gymnosperms. Give two examples.
Answer:
1. The life cycle has a distinct, dominant, diploid, asexual phase represented by the well-differentiated evergreen woody plant, which is known as the sporophyte.

3. Sporophyte shows the presence of a taproot system which is welt developed. The stem possesses branches that are dichotomies. Leaves are welt developed and are dimorphic (two types of leaves): viz,

4. Microspore develops into male gametophyte and megaspore produces female gametophyte.
These gametophytes represent the haploid phase and are highly inconspicuous in comparison with sporophytic generation.

Question 30.
Describe the fluid mosaic model of the cell membrane.
Answer:
Fluid mosaic Model By Singer & Nicholson:
(a) According to this model, the plasma membrane consists of a double layer of lipid molecules and globular protein molecules and sterols distributed at random. In comparative terms, it can be said that the plasma membrane is formed of ‘protein icebergs in the sea of lipids’.
(b) The protein molecules are globular proteins and these proteins penetrate or lie at the periphery to form a mosaic pattern.
(c) Heads of the phospholipid molecules of the two layers are directed ¡n the opposite directions while tails of the two layers face each other.
(d) In animal cells glycolipids and cholesterol are also present along with proteins.

(b) Homopolymer: A polysaccharide consisting of only one type of monosaccharides. e.g. cellulose, insulin etc. 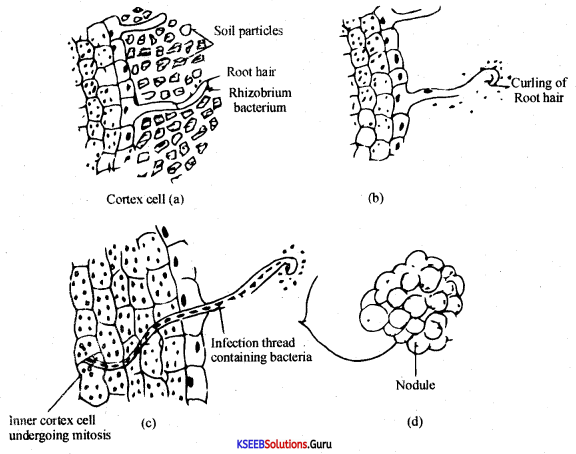 Question 34.
Write the schematic representation of the Z-scheme of light reaction.
Answer:
Non-cyclic photophosphorylation is also called ‘Z’ scheme electron transport.
In this cycle, the electrons lost by chlorophyll pigment do not return to the same molecule.
Both PS I and PS II are utilised.
One molecule of ATP is formed.
Two molecules of NADPFI2 are formed.
One molecule of O2 is formed, 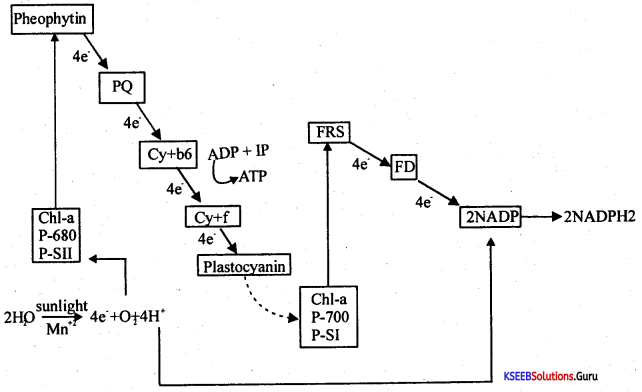 For e.g: Fatty acids would be broken down into acetyl COA for entering the pathway, acetyl C, A from the respiratory pathway will be taken out ¡f fatty acids have to be synthesised. 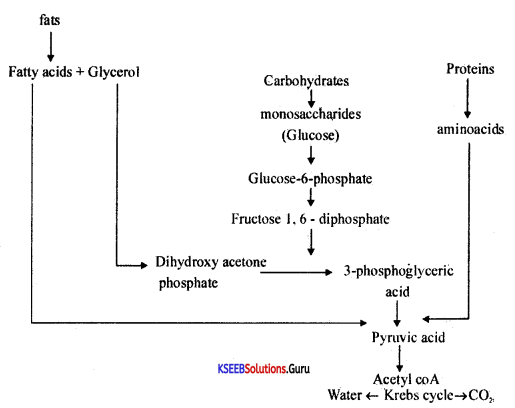 Question 36.
Draw a neat labelled diagram of the sagittal section of the human brain.
Answer: 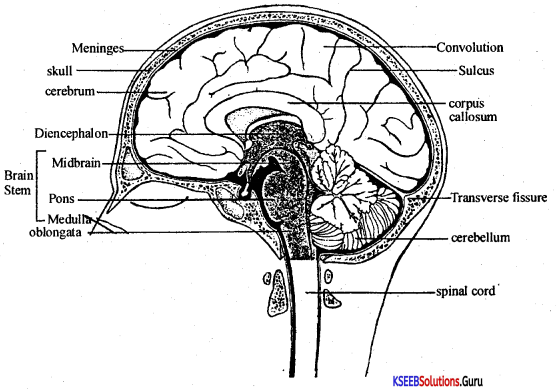 Question 37.
Name the hormones which are responsible for the following functions.
(a) Stimulates the resorption of water and electrolytes in kidneys.
(b) Maintains sleep-wake cycle.
(c) Regulates the blood calcium level.
(d) Provides immunity
(e) Supports pregnancy.
Answer:
(a) ADH or vasopressin.
(b) Melatonin
(c) Calcitonin
(d) Thymosins
(e) Progesterone.