Question 1.
Define Metabolism.
Answer:
Sum total of all chemical reactions occurring in our body is known as metabolism.

Question 2.
What is placentation?
Answer:
The arrangement of ovules within the ovary is known as placentation.

Question 4.
Gram-negative bacteria do not take a stain – Give reason.
Answer:
Glycocalyx envelop do not retain the primary stain, thus it is gram-negative.

Question 6.
Define imbibition.
Answer:
A special type of diffusion when water is absorbed by solids (colloids) causing them to enormously increase in volume

Question 8.
Name the flat bone on the ventral midline of the Thorax of the Human body.
Answer:
Sternum.

Question 9.
Define Hormone.
Answer:
Hormones are Non-nutrient chemicals that act as intercellular messengers and are produced in trace amounts.

Question 13.
Enumerate four salient features of Pteridophytes.
Answer:
(a) The main plant body is a sporophyte which is differentiated into true root, stem, and leaves.
(b) They possess well-differentiated vascular tissues.
(c) The leaves are small (microphylls) or large (macrophytes)
(d) The sporophytes bear sporangia that are subtended by leaf-like appendages called sporophylls.

Question 15.
Classify the chromosomes based on the position of the centromere.
Answer:
(a) Metacentric
(b) Submetacentric
(c) aerocentric
(d) telocentric

Question 20.
Give the meaning of the following with an example each.
(a) Parallel venation
(b) Opposite Phyllotaxy
(c) Trimerous flower
Answer:
(a) Parallel venation: Veins running parallel to each other e.g. grass, coconut, maize.
(b) Opposite Phyllotaxy: Pair of leaves arise at each node that is opposite to each other, e.g. Calatropis, guava.
(c) Trimerous flower: Floral appendages are in multiples of three e.g.: Onion, coconut.

Question 22.
Discuss the steps and the major pathways of Anaerobic respiration.
Answer:
The first step of anaerobic respiration is glycolysis, in which glucose is incompletely oxidized to 2 pyruvic acid molecules with 2 ATP and 2NADH2 formed as by-products.

In alcoholic fermentation, the pyruvic acid is first decarboxylated to acetaldehyde liberating CO2. Later acetaldehyde is reduced to ethyl alcohol by NADH2 of glycolysis.

This process occurs in anaerobes like yeast and bacteria.

In lactic acid fermentation, the pyruvic acid is directly reduced to lactic acid by NADH2 of glycolysis. NO CO2 is liberated. It occurs in lactobacilli and skeletal musclçs. 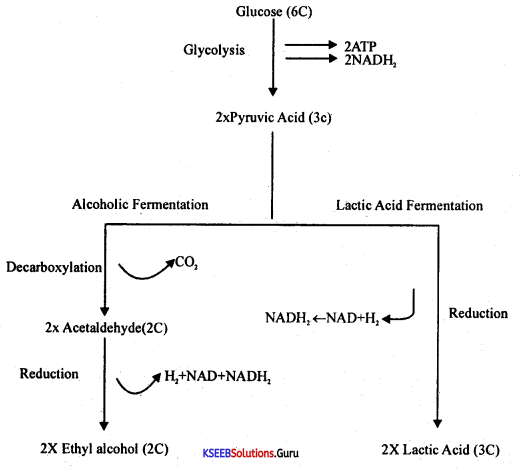 Question 24.
Describe the process of carbohydrate digestion in the small intestine.
Answer:
Pancreatic juice contains pancreatic amylase which can hydrolyze starch into disaccharides.

Question 25.
Summarise the mechanism of transport of oxygen in the blood.
Answer:
(a) Oxygen can bind with hemoglobin in a reversible manner to form oxyhemoglobin.
(b) Each hemoglobin molecule can carry a maximum of four molecules of O2.
(c) Binding of oxygen with hemoglobin is primarily related to the partial pressure of O2, partial pressure of CO2, hydrogen ion concentration, and temperature.
(d) Every 100 ml of oxygenated blood can deliver around 5 ml of O2 to the tissues under normal physiological conditions.

Question 27.
Enumerate any four salient features of class Amphibia, giving any two examples.
Answer:
Class Amphibia:
The class amphibian (“Amphi-both” brain-life) includes cold-blooded vertebrates adapted to both land and water, as such they have made a “compromise between the t environments”.

Note 1: During indirect development metamorphosis takes place.
Note 2: Pedogenesis ¡s seen in a few members like Ambystoma, where the development of ova into a young one takes place. 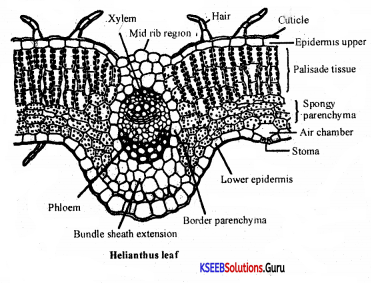 Question 29.
Explain the structure of chloroplast with a neat labeled diagram.
Answer:

Electron microscopic structure of the chloroplast

Chlorophyll-containing plastids are called Chloropbsts. They are present in the cells of all green plants and abundant in the leaf mesophyll cells. They are elliptical or oval in shape.

Chloroplast is bounded by two membranes with the intermembrane space called peri plastidial space, containing peri plastidial fluid. It is made up of H2O, mineral ions, proteins, etc. It is a lubricating fluid that avoids friction between the two membranes. The inner chamber is filled with a colorless proteinaceous fluid matrix called the stroma. Besides abundant proteins, stroma contains 70s ribosomes, circular DNA, and all the enzymes of the Calvin cycle.

Embedded in the stroma, there are green-colored bodies called grana which are inter-connected by frets. Grana is the site of light reaction, each granum consists of a stack of lipoprotein membrane discs called Thylakoids. Each thylakoid contains several photosynthetic centers called Quantasomes. Each quantasome contains about 250 chlorophyll pigments and a few xanthophylls and carotenes.

Note: As chloroplasts contain circular DNA 70s ribosomes and as they go for protein synthesis, they are regarded as semi-autonomous cell organelles.

Question 30.
Write any five differences between Mitosis and Meiosis.
Answer:

Question 31.
Explain Joseph-Priestlyls experiments on photosynthesis using a candle and a plant.
Answer:

(a) Priestly performed an experiment to reveal the essential role of air in the growth of green plants.
(b) Priestly observed that a candle burning in a closed space – a bell jar soon gets extinguished.
(c) Similarly a mouse would soon suffocate in a closed space.
(d) He concluded that a burning candle or an animal that breathes the air somehow damages the air.
(e) But when he placed a mint plant in the same bell jar he found that the mouse stayed alive and the candle continued to bum. He concluded that plants restore the air whatever breathing animals and burning candles remove.

Question 34.
Describe the structure of the stomatal apparatus in Dicot plants.
Answer: 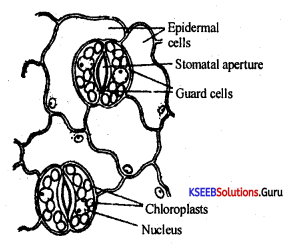 Dicot stomatal apparatus includes,
(a) Stoma: a minute opening present between the guard cells.
(b) Guard cells: Specialised epidermal cells surrounding the stoma. These are two in number and are kidney-shaped. Their outer walls are thin and elastic but inner walls are thick and less elastic. 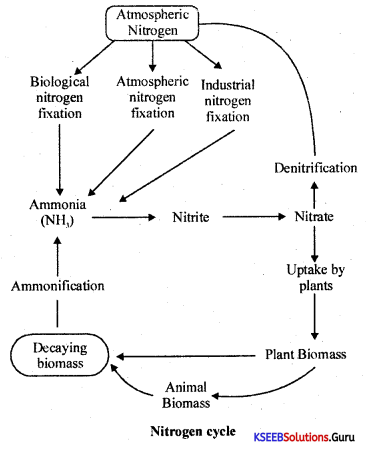 (b) Write a note on Erythroblastosis fetal.
Answer:
This disease is due to the incompatibility of Rh+ve, and Rh-ve blood which may result in the death of the child before or soon after birth. This problem arises when an Rh-ve woman marries a Rh+ve man and bears a Rh+ve fetus. Sometimes due to some placental defect, some of the fetal RBC carrying Rh antigens may pass into the mother’s bloodstream, and cause the production of anti-Rh antibodies. The concentration of anti-Rh antibodies is gradually built up in the mother, and she becomes sensitized for anti-Rh antibodies. There is no risk in the first pregnancy because enough antibodies are not found to destroy the fetus.

In the second or subsequent pregnancies involving a Rh+ve child, these anti-Rh antibodies may return to the fetus through the placenta and destroy the Rh antigen carrying RBC of the fetus and is referred to as Haemolysis. This condition is called the hemolytic disease of newborns (HDN), and the condition is identified as erythroblastosis fetal. The disease tends to become worse in each subsequent pregnancy.

Question 37.
Draw a neat labeled diagram of the sagittal section of the Human Brain.
Answer: 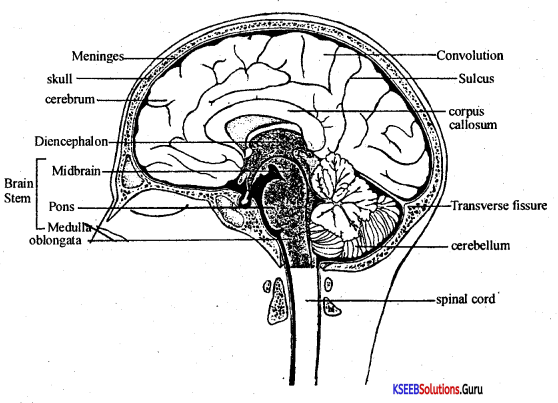