Question 1.
What is a museum?
Answer:
Museums are those places that have collections of preserved animals and plants for taxonomic studies.

Question 2.
Where do you find bulliform cells?
Answer:
The upper epidermis of monocot leaf.

Question 3.
Mention the function of gizzard in cockroaches.
Answer:
Gizzard helps in grinding the food particles and mixing them with digestive enzymes.

Question 6.
What is Ammonification?
Answer:
The process by which organic nitrogenous compounds are decomposed to produce ammonia is known as ammonification.

Question 7.
What is plasmolysis?
Answer:
Plasmolysis is a phenomenon in which the cell shrinks due to exosmosis when it is surrounded by a hypertonic solution.

Question 9.
What is emphysema?
Answer:
Emphysema is a chronic disorder in which alveolar walls are damaged due to which respiratory surface is decreased it occurs due to cigarette smoking.

Question 10.
State the function of fibrinogen in the blood.
Answer:
Soluble fibrinogen results in the formation of insoluble fibrin which forms a mesh-like network in which the blood components get entangled and results in a blood clot.

Question 11.
Write the important rules of Binomial nomenclature Give one example.
Answer:
(a) Binomial Nomenclature:
This method was introduced by Carolus Linnaeus.
In this method, every organism is given a scientific name, which has two parts, the first is the name of the genus (generic name) and the second is the name of the species (specific epithet).

Viruses are obligate parasites made up of a protein coat called capsid which encloses genetic material either DNA or RNA. They cause diseases in plants, animals, and bacteria. 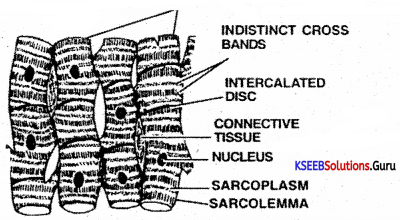 Question 14.
Write any two differences between mitosis and meiosis.
Answer:

Question 16.
Mention the role of hydrochloric acid indigestion.
Answer:
(a) It activates inactive pepsinogen into active pepsin.
(b) It converts inactive prorenin into active renin.
(c) It provides an acidic medium (pH 1.5 – 2.5) for the action of both pepsin, and renin.
(d) HCl kills harmful bacteria and loosens fibrous food.
(e) It inactivates the ptyalin.

Oxyhaeinoglobin is a very unstable compound. Hence it dissociates into hemoglobin, and molecular oxygen, when it reaches tissues.

Question 18.
Name anyone gonadotropin hormones, giving a function of each.
Answer:
(a) FSH (Follicle-stimulating hormone).
Function:

Question 22.
Describe the following:
(a) Synapsis (b) bivalent (c) chiasmata
Answer:
(a) The process of the pairing of homologous chromosomes is called Synapsis.
(b) A chromosome containing two chromatids is called a bivalent.
(c) The regions where segments of non-sister chromatids of the bivalents are exchanged are called chiasmata.

Question 23.
How are the minerals absorbed by the plants?
Answer:

During filtration, the blood cells and large organic molecules are retained in the capillaries. The fluid containing dissolved substances is passed into the capsular lumen. This is called glomerular filtrate. It contains a number of useful substances like glucose. amino acids, minerals, etc., as well as waste products.

Question 25.
(a) What is a pacemaker?
Answer:
SAN is also known as the pacemaker of the heart because it initiates the electrical impulses for the heartbeat.

Cardiac Output:
The amount of blood pumped by the right and left Ventricles per minute is known as cardiac output. It is determined by multiplying the stroke volume with the number of heartbeats/mm.

3. Muscular Movement:
The contractile property of muscles is responsible for muscular movement.

4. Flagella movement: It is caused by a long whip-like process called flagella. It is seen in spermatozoa, euglena, and sponges.

Question 27.
Describe the important characteristics of gymnosperms.
Answer:
Gymnosperms represent primitive phanerogams (flowering plants) or spermatophytes. They are generally regarded as ‘naked seeded plants’ due to the presence of exposed seeds without being protected by the ovary wall as there is no well-defined carpel.

General features:
1. The life cycle has a distinct, dominant, diploid, asexual phase represented by the well-differentiated evergreen woody plant, which is known as the sporophyte.

3. Sporophyte shows the presence of a taproot system which is well developed. The stem possesses branches that are dichotomies. Leaves are well developed and are dimorphic (two types of leaves): viz,

4. Microspore develops into male gametophyte and megaspore produces female gametophyte. These gametophytes represent the haploid phase and are highly inconspicuous in comparison with sporophytic generation.

Question 28.
Draw a labeled diagram of the Alimentary canal system of cockroaches.
Answer: 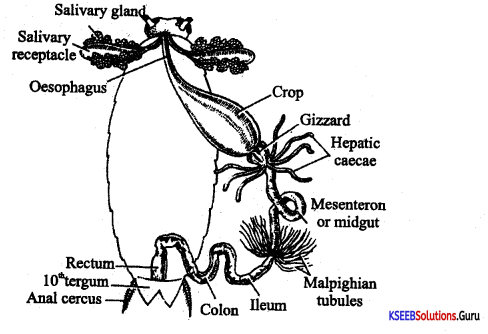 Question 31.
Explain the mode of enzyme action.
Answer:
Enzymes are specific in their substrate molecules.
When enzyme (E) and its substrate (S) come together, they make an intermediary complex called the E-S complex, like a key coming with a lock and making a complex. This is the primary step for enzyme action.

So the enzymes are highly specific for the type of reaction they catalyze.
Over a fraction of a time, the enzyme cleaves the substrate into its product.

Since the product is different from the substrate, it cannot remain in contact with the enzyme, the enzyme becomes free.

Question 32.
Describe the transpiration pull model of water transport in plants.
Answer:
It is one of the most successful physical theories of the ascent of sap. Dixon and Jolly proposed
this theory. According to this theory, the ascent of sap is due to three factors namely,
(a) Cohesive force of water
(b) Adhesion of water molecules to the walls of the xylem vessel
(c) Transpiration pull

A strong intermolecular force of attraction exists between water molecules. Thus water molecules are bound to each other forming a continuous column of water.

There is a force of attraction between water molecules on the inner walls of xylem elements.
Therefore water molecules are attached to the wall of the xylem. It is called adhesin.

Due to the adhesive and cohesive properties of water, a continuous column of water is present in the xylem. Transpiration at the leaf surface forces the mesophyll cells of the leaves to draw water from the neighboring xylem elements. This creates a suction force known as Transpiration pull.

This suction force pulls the water column in the xylem upwards. This ascent of sap is due to the combined effect of adhesive, and cohesive properties of water and transpiration pull. 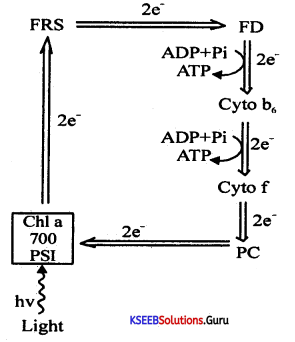 Cyclic Photophosphorylation :
It is a cyclic path of electrons expelled from chlorophyll through a series of substrates that are arranged in a suitable oxidation-reduction potential. The energy in the electrons is used for the phosphorylation of ADP to ATP.

In PS I the absorbed photons of light excite chlorophylL a 700 to eject energized electrons on makes it positively charged and unstable. Electrons pass through the sequence → FRS → FD → Cyt b6 → Cytf → PC and generate ATP at two places. Finally, an electron from PC returns to chi-a restoring its stability.

Question 34.
Draw a labeled diagram of a multipolar neuron.
Answer: 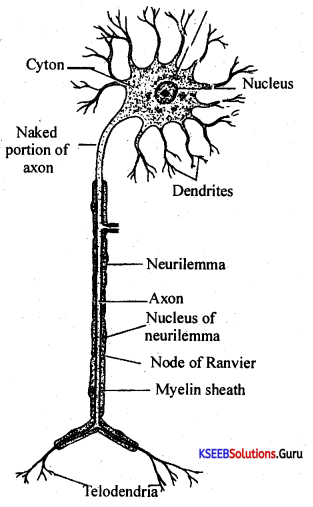 Question 35.
Give the schematic representation of Kreb’s cycle?
Answer: 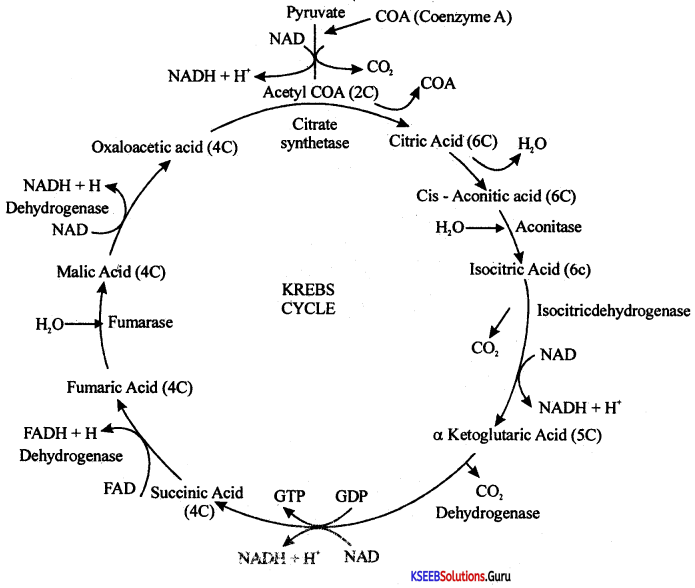 Note: To account for two molecules of acetyl CoA produced from ¡ molecule of glucose the entire reaction has to be multiplied by two.

Note: Efficiency of Krebs cycle along with its predatory reaction is 30 ATPs.

Question 36.
(a) What is Photoperiodism? What is its significance?
(b) Explain the sigmoid growth curve.
Answer:
Photoperiodism:
Plants, in order to flower, required a particular day length or light period called photoperiod, and the response of the plants to photoperiod ¡n terms of flowering is called Photoperiodism.

Photoperiodism was first studied by W.W. Garner, and HA. Allard.

Based on their photoperiodic responses, plants are classified into the following groups:

Growth curve:
The curve obtained when the growth in size or weight or on entire plant or its individual parts is plotted against time is called growth curve ft is always ‘S’ or sigmoid in shape shows free distinct phases namely.

1. Lag phase: This is the initial stage where the growth rate is very slow But it gradually increases with time.

3. Steady phase or stationary phase: This is the last phase in which plants show no growth. Therefore the curve becomes almost orbital. 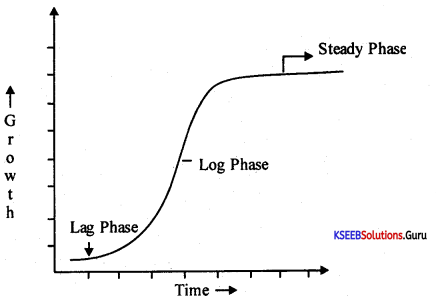 Question 37.
Diagrammatically indicates the location of the various endocrine glands in our body.
Answer: 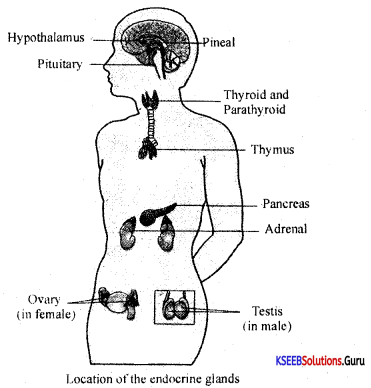